“You are an affront to all Kang kind!” 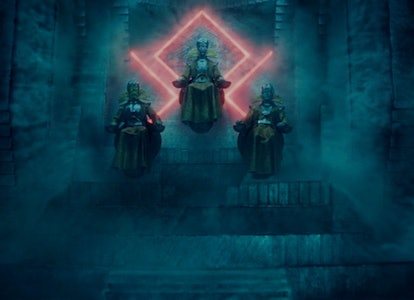 Kang the Conqueror is also Kang the Inevitable. Jonathan Majors will portray the classic villain in Ant-Man and the Wasp: Quantumania, but everything in the Disney+ series Loki seems to be hinting at an earlier Kang appearance than we were expecting.

The Time Keepers from the start bore a resemblance to Kang, and in the comics, Judge Ravonna Renslayer’s namesake was romantically tied to him. But with only one episode left, it seems unlikely Kang would be introduced so late. However, that doesn’t mean a Kang won’t appear. It may just not be the Kang.

For two issues of Avengers in 1986, Kang was one of many in a Council of Kangs, a conglomerate of three Kangs from alternate universes who seek to bring order to the chaos of the time-space continuum caused by constant time traveling. Sounds a lot like the Time Variance Authority, doesn’t it? It pretty much is, including Ravonna Renslayer as Kang’s beautiful partner in crime, not a TVA bureaucrat.

However, the plan behind the Council of Kangs is short-lived, as one sets out to use the last remaining double to fight the Avengers, then replaces him with a robotic copy, then rules the universe via his own robotic doppelganger.

This obviously isn’t the same agenda as the Time Keepers in Loki, but there are some strong similarities: three Kang-like beings who exist to straighten out time, only to be replaced by robots. Could Loki borrow more elements from the Council of Kangs’ appearance in the comic? Here’s how it could be the perfect addition.

The theory that Kang is behind the Time Keepers has been around since the first-ever episode, noting Kang’s propensity for time shenanigans and the physical resemblance between him and one of the Time Keepers in particular. But what if the Kang that’s behind the TVA isn’t the Kang we’ll meet in Quantumania, but a variant?

Introducing a variant Kang before the “real” one would be the perfect way to show just how important variants are. With more than a year before Kang is set to make his first appearance, a variant Kang would both tease the character without calling for the talents of Jonathan Majors and force MCU fans to remember that the first version of a character we’re introduced isn’t necessarily the “true” one.

The Council of Kangs also offers the opportunity to introduce some humor that’s very on-brand for Loki. The Council appeared last year in Spider-Ham #4, following the adventures of beloved animal Spider-Man variant Peter Porker. In that issue, The Council of Kangs is presented with a variant that, much like Loki-gator, doesn’t seem to fit in — Kangaroo the Conqueror.

Whether the Council of Kangs appears as a way to introduce an alternate universe version of the upcoming villain or just a one-off gag about how variants can quickly get out of control, Loki’s premise provides the perfect opportunity to start building buzz around a character not set to appear in the MCU until 2023.