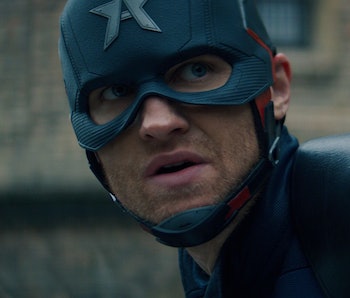 The Time Keepers are the closest the TVA has to gods. Agents like Mobius and Judge Renslayer don’t question their methods, they just carry out their vision. While the Time Keepers take care of untangling the multiverse, Agents and Judges keep things in order, because that’s the way it should be. But...why?

Even the tiniest bit of critical thinking reveals that the Time Variance Authority and its Time Keeper leaders probably aren’t what they claim to be. But haven’t we been down this road before?

Loki seems to be hurtling towards a disappointing twist that feels all too familiar thanks to The Falcon and the Winter Soldier and the Power Broker. But it’s not too late to change course.

Loki and the Time Keepers

Thanks to Miss Minutes, we know the purpose of the Time Keepers very clearly. They’re the crafters of the Sacred Timeline, and the TVA agents work to keep that one path clear of wandering Variants. But if they’re so important to the work of these characters, why haven’t we seen them yet in Loki?

Between their conspicuous absence and the way they’re referred to as “busy dictating the flow of time” or “toiling away in their chamber, untangling the epilogue from its infinite branches,” it really seems like the Time Keepers are nothing but figureheads — quite literally, as wood sculptures of their faces loom over Judge Renslayer during Loki’s trial.

All this evidence leads any MCU speculator to the conclusion the Time Keepers are mere illusions of authority, to make it seem like there’s some great Celestial being in charge of what happens when, in fact, it’s just a bunch of TVA agents running around in beige jackets and military gear.

Loki and Falcon and the Winter Soldier

This reveal, that the looming villain is actually a lot more mundane than first thought, is exactly where The Falcon and the Winter Soldier went wrong. While whole episodes were spent building up the Power Broker as a Big Bad, the reveal that the show’s crime boss was actually just Sharon Carter totally fell flat. Not only was it obvious from a mile away, but the series finale’s big twist was also full of plot holes.

However, there’s still a way Loki could pull off its Time Keepers twist without making this same mistake. There could be a moment where Loki (the audience surrogate of the series) comes to this very same conclusion. Knowing Loki and how he’s more than willing to go all-in on a hunch, he could attempt to call the Time Keepers’ bluff, only to be met with three very real lizard space gods.

Alternatively, this could be a Wizard of Oz moment, meaning there could be a “man behind the curtain” of the Time Keepers, perhaps Judge Renslayer herself, as she’s the most senior member of the TVA we’ve seen so far.

Another option? The TVA is actually being run by Kang the Conqueror, a major Marvel villain already confirmed for Ant-Man 3 but also rumored to make a Loki appearance.

It’s not like there can’t be a truly surprising moment in a Marvel show. Agnes’ transformation into Agatha Harkness in WandaVision was only obvious if you were aware of the comics or the leaks (and the show clearly wasn’t trying to keep her general weirdness a secret).

With only four more episodes of Loki left to explain these flagrant hints, it still remains to be seen how they’ll explain away the largest part of the show’s universe. Hopefully, it really was the Time Keepers all along.