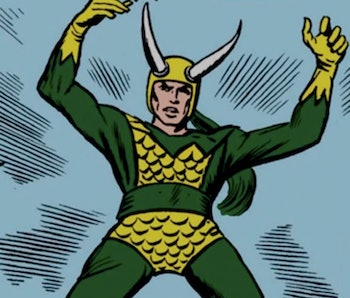 What makes a Loki a Loki? The Marvel show’s much-repeated question just got a whole lot trickier thanks to the introduction of four new Loki variants in the post-credits scene from Episode 4.

To be fair, we were expecting Kid Loki and Classic Loki, both of whom are well-known in the comics and were already rumored for the Marvel Cinematic Universe show, but it gets a lot more complicated from there. We’ve got “Boastful Loki,” though it’s still unclear if he’s based on a comics character or is purely a creation of the show. Weirder still is Alligator Loki, a small reptile perched in Kid Loki’s arms with the Asgardian’s signature horned crown on its head.

But is it really possible that this alligator is a Loki variant? Believe it or not, there’s a precedent for this, both in the comics and in the character’s mythological roots. That’s right, it’s time to talk about Horse Loki!

Loki and animals in Marvel Comics

Loki is a shapeshifter, as Agent Mobius informs the Time Variance Authority officers way back in Episode 2. He can change his image to suit any purpose, even if that purpose is just annoying his brother by pretending to be Captain America like in Thor: The Dark World.

In the comics, Loki uses this power all the time to get his way, though his purposes don’t always require a human visage. For example, in the recent storyline Thor & Loki: Double Trouble, Loki turns himself into both a horse and a snake.

It’s a lot of fun to see a horse and snake version of Loki running through the streets of Asgard, but these moments have a much more ancient origin, and it’s one that changes everything we know about Loki.

Loki and animals in Norse Mythology

Most of Norse mythology can be traced to two sources, the Prose Edda and the Poetic Edda. The Prose Edda covers the birth of Sleipnir, Odin’s eight-legged horse. It recounts how Loki transformed himself into a mare as a way to escape the consequences of his trickery against a local craftsman. When the craftsman went to find Loki on a stallion named Svadilfari, the two horses became enamored with each other.

According to the Prose Edda:

“Loki had such dealings with Svadilfari, that somewhat later he gave birth to a foal, which was gray and had eight feet; and this horse is the best among gods and men.”

Not only was Loki an actual horse, he was a female horse that gave birth to this great steed. But this wasn’t Loki’s only mythological foray into motherhood. In fact, he had three animal babies but not in the form of an animal.

“Loke had yet more children. A giantess in Jotunheim, hight Angerboda. With her he begat three children. The first was the Fenris−wolf; the second, Jormungand, that is, the Midgard−serpent, and the third, Hel.”

While these animals were not born of Loki shifting into animals, it goes to show how Loki has a history of being related to animals. Could Alligator Loki be the result of one of these strange unions within the MCU? Or is it simply just an animal variant from another part of the multiverse, like Spider-Ham? Loki Episode 5 will hopefully hold the answer.