"Boastful Loki” could be this surprising character from Marvel comics

“You will be unless you come with us.” 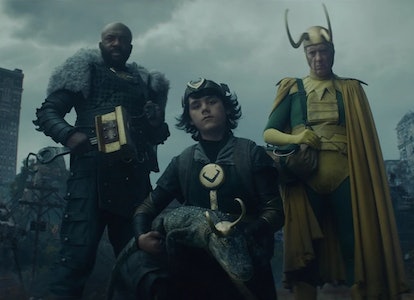 Loki finally delivered what fans have been craving: a mid-credits scene, complete with a glimpse at two other classic Loki variants.

Old Loki (aka “classic Loki”) and Kid Loki have made their grand arrival in the Disney+ series. And while those variants came as little surprise to fans who followed along with casting news, there was a third Loki variant who caught everyone off-guard.

This character, played by Deobai Oparei, is credited as “Boastful Loki.” But who is Boastful Loki? Could he be inspired by another Asgardian altogether?

Boastful Loki shares some Ancient Warrior bravado with Sigurd, a Marvel Comics character who has taken many forms, but most bears a resemblance to “Zig,” Sigurd’s alias when he was living on Earth and in hiding from his past. This Sigurd encountered Kid Loki in the Agent of Asgard run of comics, and they dueled for Loki’s sword, Gram, which Sigurd had originally wielded.

It’s pretty clear that Boastful Loki is another Loki variant. After all, there’s no way Loki could wake up from being pruned and encounter two variants of himself along with some random other guy. However, this Loki could be heavily inspired by Sigurd — and borrow other elements from other characters as well.

Not much is known about this character just yet, but his wordless appearance gives fans plenty to speculate about. Of the three Loki variants (and one Loki alligator), Boastful Loki looks the most authentically Norse, with his fur-trimmed leather costume. Classic Loki is nearly a page-perfect replica of Loki’s first appearance in Marvel Comics, while Kid Loki looks more like the modern Loki interpretations. Boastful Loki is different.

It’s most likely Boastful Loki will be influenced by Sigurd in the way Sylvie was influenced by Sylvie Lushton: that is to say, in name and appearance only. Though they may have different names, these are still Loki variants through-and-through.

Furthermore, the reason these variants are saddled with seemingly unrelated names is purely practical. If Sylvie was just referred to as “The Variant” or “Lady Loki,” it would be confusing and rob Sylvie of her personhood. She’s her own character, and deserves her own name.

Hopefully, these variants will be given a similar privilege in the final two episodes, and through their names we’ll be able to infer more about their comic namesakes. Whether Boastful Loki is named after Sigurd, inspired by Sigurd, or simply a new creation original to Loki, learning how these characters will be distinguished from one another is sure to expose plenty about their personalities — and will surely lead to a chaotic variant reunion.