“What exactly makes a Loki a Loki?” 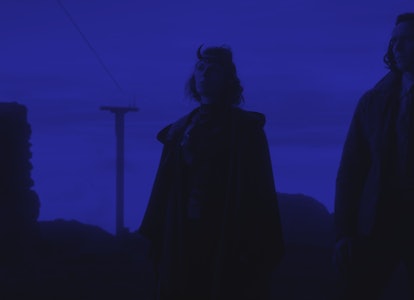 Who saw this turn coming? Loki Episode 3 could have gone in a number of different directions coming off the climactic ending of last week’s episode. It could have been a heist episode or a chase through different moments and places all throughout and time and space. It could have even been a flashback, similar to WandaVision Episode 8, all about the origins of Sophia Di Martino’s Loki variant (call her Sylvie).

Instead, Loki Episode 3 is a rare thing for the Marvel Cinematic Universe: a rom-com. The episode explores the rivalry (and burgeoning romance?) between Tom Hiddleston’s Loki and “Sylvie” as it develops and evolves over the course of their time trapped together on a planet facing total annihilation.

It also confirms one of the most popular Loki fan theories that’s been running around online in recent weeks.

Major spoilers for Loki Episode 3 ahead.

Loki Episode 3 picks up, for the most part, where the Disney+ show’s second episode left off.

Using her bombing of the timeline as a distraction, Di Martino’s Lady Loki/Sylvie (who the episode confirms is essentially inspired by both the Lady Loki and Enchantress characters from Marvel Comics) infiltrates the TVA headquarters in search of a set of Golden Elevators that may or may not lead her to the Time Keepers. She takes out a handful of TVA agents along the way (in truly impressive fashion) before finally reaching the elevators. Her quest for the Time Keepers is cut short, however, by the appearances of both Tom Hiddleston’s Loki and Gugu Mbatha-Raw’s Judge Renslayer.

Hiddleston’s Loki uses a moment of tension between Sylvie and Renslayer to steal Sylvie’s TemPad and teleport the two of them out of the TVA, sending them to the worst of all the historical apocalypses Sylvie had kept saved on time-hopping device.

Loki and Sylvie arrive on the planet of Lamentis-1 in the year 2077 — on the exact day that the planet is in the midst of being crushed and forever destroyed by its own disintegrating moon.

In the comics, Lamentis is a planet located on the very outskirts of the Kree Empire. Its comics history isn’t all that rich, though, as its appearance in 2007’s Annihilation: Conquest Prologue #1 is the only time it’s been featured up to this point.

In Loki, Lamentis-1 is a purple planet that, since the series takes us to it on the eve of its destruction, has chunks of its moon constantly crashing onto its surface like an endless barrage of missiles. Fortunately, the planet’s chaotic destruction ultimately serves as the perfect backdrop for the tempestuous relationship forged by Loki and Sylvie throughout the episode.

With Sylvie’s TemPad in need of a desperate recharge, her and Loki’s only hope for escaping the planet’s destruction is in finding an energy source powerful enough to juice up the TemPad again. When that ultimately fails and the TemPad is seemingly destroyed (more on that below), their chance at salvation becomes hopping a ride on the “ark” that’s shortly set to depart the planet.

Episode 3 uses Loki and Sylvie’s journey across Lamentis-1 to establish and begin developing a relationship between the two characters. It’s a bond that, at least at first, is pretty heavily indebted to the kinds of Nora Ephron rom-coms and screwball comedies Loki head writer Michael Waldron has previously expressed admiration for. There’s plenty of bickering throughout, and since these are two Loki variants we’re dealing with, more than a few attempted betrayals.

But the more time the two spend together, the more that Loki, as a show, continues its meta exploration of who Loki is as a character (“What exactly makes a Loki a Loki?” Sylvie notably asks at one point). The pair exchange stories about their childhoods and discuss how they each learned magic. We even learn that, according to Sylvie, she’s spent most of her life on the run from the TVA, which just raises even more questions about her history with the organization she aptly refers to as the “boring, oppressive time police.”

All of this culminates in a discussion between the two characters about, well, love. Sylvie hypothesizes that love may be nothing more than hate or mischief in the end, but Hiddleston’s Loki doesn’t agree with those theories. However, after clumsily attempting to compare the emotion to an “imaginary dagger,” he ultimately ends the episode unsure of what he believes love really is.

For a character who has spent most of his time in the MCU up to this point being evasive and mysterious about his feelings towards even those closest to him, it makes sense that Loki is finally forcing Hiddleston’s God of Mischief to define what he thinks love actually is. It’s a seed that will, no doubt, pay off by the time Loki Season 1 comes to an end.

As interesting as Loki Episode 3’s discussions of love are, it’s the TVA revelation in the episode’s final act that ultimately makes the biggest impact.

We are, of course, referring to Sylvie’s reveal that the TVA’s agents weren’t actually created by the Time Keepers, but are all variants like she and Loki. Marvel fans have been speculating that might be the case ever since the series premiered at the start of June, and Sylvie’s announcement in Loki Episode 3 is the confirmation we’ve been waiting for.

The reveal presents just one more reason not to trust anything that we were told about the TVA in the first two episodes of Loki. If the TVA agents weren’t created by the Time Keepers but are just captured variants who have had their memories wiped, then there’s little reason to believe the organization’s origins are as simple and straightforward as its propaganda videos claim. In fact, the ongoing theory that the Time Keepers aren’t real is looking pretty convincing.

(The reveal also adds further credence to the popular fan theory that the love Owen Wilson’s Mobius has for jet skis is a direct result of his time on Earth as well. Fingers crossed that also means we actually will get to see a shot of Mobius riding a jet ski before Loki Season 1 concludes.)

Unfortunately, how exactly Hiddleston’s Loki will share this newfound information with Mobius and the other TVA agents is a problem for another time. First, he and Sylvie will need to figure out how to get off of Lamentis alive following the destruction of their only escape vehicle at the end of Loki Episode 3.

In the meantime, feel free to take another few listens to Bonnie Guitar’s “Dark Moon,” which plays over the end credits of Loki Episode 3.

More like this
Entertainment
Jan. 12, 2023
Harry Styles’ Eros is returning to the MCU — but why?
By Eric Francisco
Entertainment
Jan. 25, 2023
The MCU could bring back a hero from its most underrated TV show
By Dais Johnston
Entertainment
Jan. 13, 2023
Mike Colter would "entertain" the idea of coming back to Luke Cage
By Hoai-Tran Bui
LEARN SOMETHING NEW EVERY DAY.
Related Tags
Share: