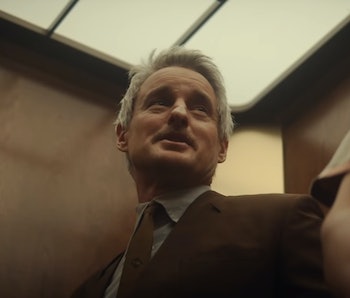 Admit it: While watching previews for Marvel Studios’ Loki, you’ve found yourself wondering the all-important question, “Why does Owen Wilson look like that? What’s with the mustache?”

Dear reader, let me clue you in on something that seems, admittedly, far more unlikely than it actually is: Owen Wilson’s facial hair is one of Marvel’s most comic book accurate visual touches… and a reference to one of Marvel’s most beloved comic book editors. So pull up a seat and I’ll tell you the story of the Time Variance Authority.

As described in 1991’s Fantastic Four #353 — the first time that the TVA had properly appeared in any comic book, although the organization had existed in the Marvel Universe since 1986’s The Mighty Thor #371 — the Time Variance Authority is “simply the biggest organization in the known Omniverse.” (Remember that term; it’ll become important later.) It’s a massive, overly complicated organization that exists to track, and in some cases control, every single timeline in existence, with entire departments of literally faceless entities called Chronomonitors sitting at desks monitoring everything that has ever happened, will ever happen, and is currently happening.

If that sounds ambitious and a bit ridiculous, well, that’s the point. As originally defined, the TVA is “a self-replicating bureaucracy of infinite dimension” with a knowingly extreme motto (“If it’s moving at lightspeed, it’s moving too slow”). In its earliest appearances, the TVA was an extended joke that transformed the traditional idea of how the Marvel Universe was run -- typically by anthropomorphized entities representing existential ideas with names like “Eternity” or “the In-Betweener” — into a parody of middle management that plays out like The Office on the most ambitious scale imaginable.

That isn’t to say that the TVA wasn’t necessarily a problem for the heroes of the Marvel Universe. On at least two occasions, agents of the TVA have outright kidnapped heroes with the intent of removing them from the timeline entirely. (The Fantastic Four managed to escape before anything bad happened, while She-Hulk stood trial for her time crimes, only to be exonerated by the power of love in 2006’s She-Hulk #2.)

They’re not entirely destructive, however. According to one appearance, the TVA regularly creates new realities to house alternate possibilities based on any particular event, meaning that they’re regularly creating new universes even as they seek to tie off any unruly influence on the greater timeline.

Not bad for a concept that started as a simple Macguffin to explain why a Judge Dredd parody was attacking Thor. (“Justice Peace,” the Dredd parody from a future where World War VII was underway, would show up multiple times as an agent of the TVA sent through time, although he would never quite have the same intensity while repeatedly yelling “Kraggit!” — presumably a future curse that we’ve yet to discover in this era. Don’t worry, he and Thor teamed up soon after their initial fight.)

There is, however, a further layer of parody to the Time Variance Authority’s comic incarnation beyond simply making fun of office politics on a grand scale — and it’s one that explains why Owen Wilson looks the way he does in Loki. It’s just that this deeper layer goes… maybe a little too deep in terms of comic book in-jokes.

While the majority of employees of the TVA can be split into one of two groups — 1) the Justices, who go into the field on missions throughout time, and 2) the Chronomonitors, who keep track of what’s actually happening throughout history past, present and future — there are other faces that re-appear when the organization shows up in comics. Really, there’s one other face, and it belongs to TVA office manager Mr. Mobius M. Mobius...

Except it actually belongs to real-life former Marvel editor, the late Mark Gruenwald.

Gruenwald, who died in 1996, was a significant figure at Marvel in the 1980s and early 1990s. He was the writer of Captain America for more than a decade and created U.S. Agent. He wrote many other titles, including the first Hawkeye solo project way back in 1983. He was also the editor for a number of flagship series, including Avengers, The Mighty Thor, Iron Man, and more. But most importantly, for the purposes of this story, he was the editor and co-creator of The Official Handbook of the Marvel Universe.

If the TVA is an organization trying to maintain order across the timelines of the Marvel Universe and beyond, the Official Handbook was Gruenwald’s attempt to bring order to the fictional universe by organizing its history and creating power statistics for the more hardcore, detail-oriented fans. No wonder, then, that Walter Simonson (the writer and artist who created the TVA, and Mobius, and a friend of Gruenwald’s) would use him as a model for the man in charge of things at the TVA. Among Gruenwald’s distinguishing features? The mustache that Owen Wilson now wears in tribute.

Gruenwald clearly enjoyed the joke. He wrote a TVA story himself in 1994’s Fantastic Four Annual #24, where readers got to meet Mobius’ boss, Mr. Alternity -- who bore a striking resemblance to his own boss at the time, Tom DeFalco.

Simonson also snuck in an additional joke when Mobius first appeared to cement the Gruenwald connection. The dialogue quoted earlier mentioned the “Omniverse,” which isn’t a term commonly used in Marvel fiction, but it was the title of a 1970s fanzine created by Gruenwald dedicated to keeping track of continuity and offering up explanations to keep timelines under control. (Think of it as chronomonitoring for beginners.)

The term, as Gruenwald intended it, described a framework where multiple multiverses could co-exist — perhaps providing a clue as to just where Marvel is going with Loki’s six-episode run or beyond. Somewhere, Mobius (and Gruenwald) would be proud.