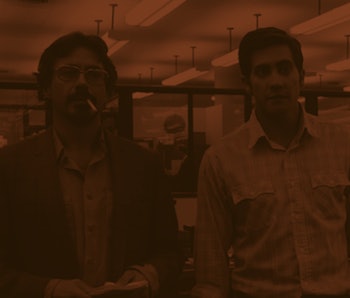 Thanks to a certain global pandemic, there's never been a better time to catch up on your Netflix queue. Considering the constant churn of movies coming and going from the streaming service, it's easy to let the best films pass you by. But hopefully, this article will ensure that true crime fans catch one of the best movies the genre has to offer before it leaves Netflix later this week.

David Fincher's Zodiac (2007) leaves Netflix on March 19, 2020 (this Thursday). But wait! Before you rush off to stream Zodiac in the background while you "work from home," here's why this movie is worth your full attention.

Looking back now, Zodiac feels like a star-studded blockbuster, but at the time that wasn't exactly the case. In 2007, Robert Downey Jr. was still a huge liability, and he wouldn't be reborn as Iron Man until a year later in 2008. Jake Gyllenhall was fresh of the success of Brokeback Mountain and Jarhead, but far from the household name he is today. Mark Ruffalo was barely a known quantity (he didn't really breakthrough until The Kids Are AlrightIthree years later). As for Brian Cox, at that point, he was likely best known for his villainous turn in X-Men 2, and it would be another decade before he became Succession's Logan Roy.

In other words, Zodiac is one of those movies made great thanks to genius casting. David Fincher and his team managed to pick not one but three rising stars and put them in a room for a fraction of what that would have cost just a few years later. The result speaks for itself.

David Fincher might not be the first name you think of if you're looking for true crime, but Zodiac cemented him as a master of the genre. Following classic thrillers like Fight Club and Seven, Zodiac adopted a similar tone while applying it to a true story, making the film even scarier. (I still remember the long walk home after seeing it in theaters with my brother back in 2007.)

Fincher followed that up with The Social Network (arguably the greatest true crime movie of all time), and ultimately revealed his loving tribute to the genre with Mindhunter. The two-season series tracked the invention of the term "serial killer" through a series of interviews with real-life serial killers like Charles Manson and Son of Sam.

Anyone still upset that Minhunted Season 3 got canceled needs to watch (or rewatch) Zodiac while Netflix still has it available for streaming.