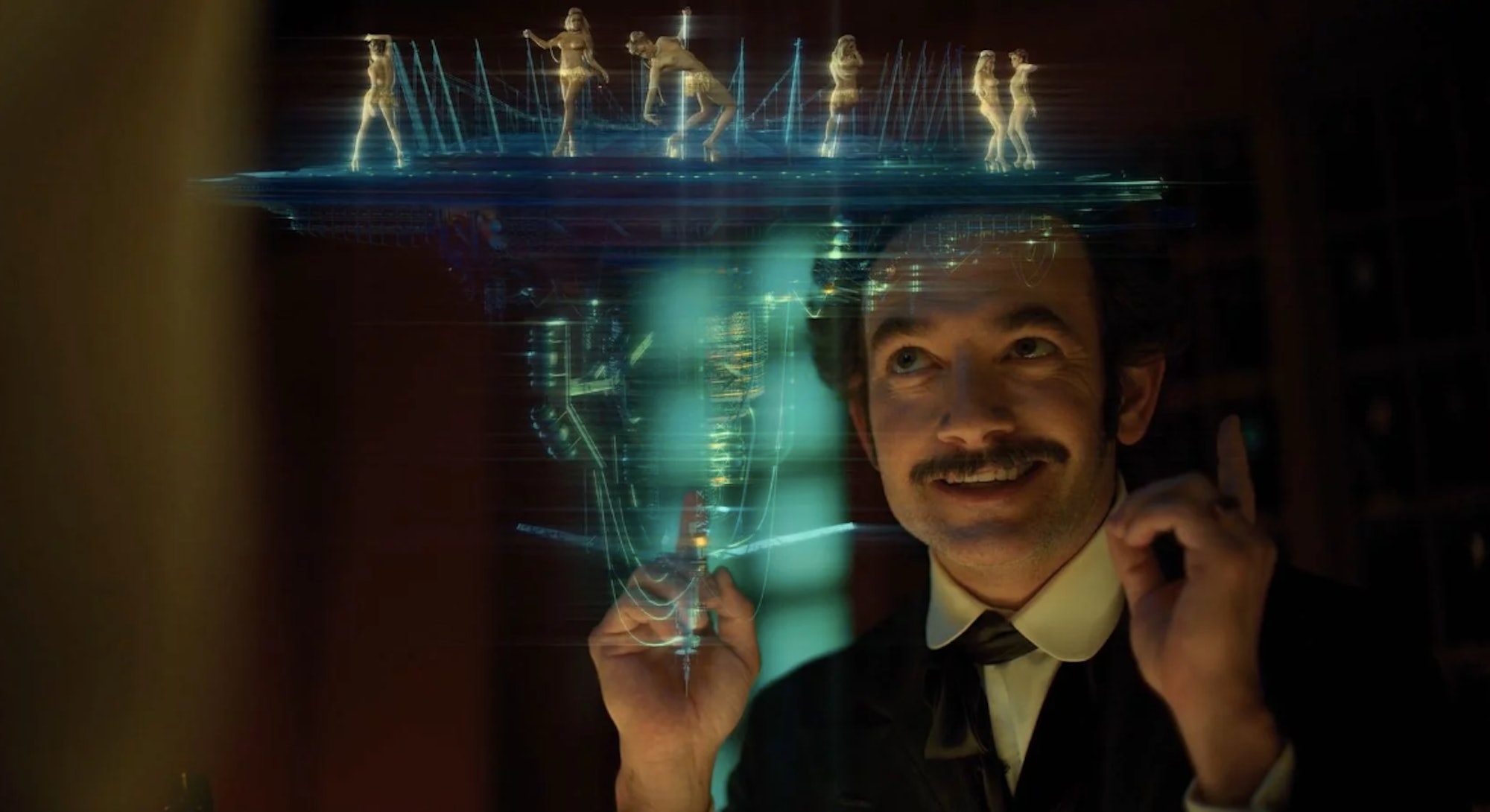 Altered Carbon has found its heart in Season 2, and his name is Poe.

In Netflix’s cyberpunk series, immortality is the name of the game as humanity exists on a new playing field — one where consciousness can be transferred from one body (or "sleeve") to another through an insertable technological advancement known as a "stack". Not only does this provide endless possibilities regarding stories that exist within this small screen cinematic world, the notion that multiple faces can embody one identity offers the Netflix program continuing potential to re-cast actors in these roles. It's like Doctor Who, but much darker.

Season 2 of the series, which was adapted from the cyberpunk novels of Richard K. Morgan, is an example of this type of narrative rebirth. Anthony Mackie takes up the mantle that Joel Kinnaman left, starring as Takeshi Kovacs, the criminal-turned-bounty-hunter-hero from Season 1. In fact, multiple characters return in these new episodes with fresh faces taking on the roles. But there's one returning hero who hasn't changed, at least outwardly, and that's Poe (Chris Conner). The former A.I. hotel-owner has found a new purpose in the story, as the loyal, yet glitchy, partner to Altered Carbon's reluctant hero.

"It's so interesting the way Poe was programmed as a hotelier, or a hotel, to service human guests," Season 2 showrunner Alison Schapker tells Inverse. "To then be a sort of defunct hotel and not be working, left him with that little demented, or kind of obsessive, fascination with humans."

Ditching Season 1’s noir component, Altered Carbon fully embraces its emotional core this time around. And while Mackie's portrayal of Kovacs, "The Last Envoy," surely helps to pivot the series into a more engaging playing field, it's Poe's evolution that ultimately grabs the audience's heartstrings and plucks away until the final episode.

In Season 2, Kovacs continues his lovelorn mission of finding his long-lost girlfriend Quellchrist Falconer (Renee Elise Goldberry). This storyline serves as the story foundation this season, but right there by his side is Poe, the downtrodden former hotelier whose drive to further understand human existence gives the series some familiar sci-fi flavor.

He's the Commander Data to Kovacs' Jean-Luc Picard. The Dorian to Detective John Kennex. That second reference, from Fox's short-lived sci-fi series, Almost Human — a futuristic genre procedural that paired a troubled A.I. (Michael Ealy) with Karl Urban's hardened police officer — applies in more than one way here as Altered Carbon's new showrunner was a staff writer on the 2013 series.

Almost Human may have ended after two seasons, ultimately failing to see its full story potential play out on the small screen, but Schapker has already injected the necessary emotional stakes into Altered Carbon that will hopefully carry the show on to more episodes. And we have Poe's journey to thank for that.

"Poe, as Chris Conner plays him, is so fascinated with humanity," Schapker continues. "He has become kind of the heart of the show. And in many ways, more human than the humans."

Poe, and the lovely relationship he finds himself in with DIG 301 (Dina Shihabi), another A.I. introduced this season, helps push the series into engaging territory. It's through this storyline, and the ongoing struggle he faces his own mortality through a degenerative issue similar to that of Alzheimer's Disease, that gives Poe a sympathetic air. And as the episodes progress, the relationship dynamic between him and Kovacs evolves from bickering and abusive to endearing and respectful.

"I love the way his relationship with Kovacs is developing and the tensions that crop up between them," Schapker says. "Their scenes in the finale are some of my most favorite things that I've written. It’s an amazing thing when you have this magic happening in a character as embodied by an actor, and we really have that in Poe with Chris Conner."

Once an ancillary character who'd pop up here and there to provide levity through the bleak ultra-violence of Season 1, Poe's upgrade and journey in the new episodes speak to the show's bigger questions of morality and humanity that exist in a realm where one's sense of self can be easily lost, depending on the body they're inhabiting. More-so, though, as the season reaches its crescendo, the A.I. proves his heroism and worth by not only assisting in the dangerous mission Kovacs and Quell find themselves in, but by revealing himself as a fail-safe in keeping the consciousness of his best friend intact.

If the show is to persevere for a third season, and Takeshi Kovacs re-sleeves into a new body, it'll most certainly be due to Poe's good-natured loyalty. And if Kovacs does indeed return with a new face, we'd be hard-pressed not to give another nod to the lovable A.I. character, who is, for better or worse, Altered Carbon's quirky, dependable, walking-and-talking version of the TARDIS from Doctor Who.