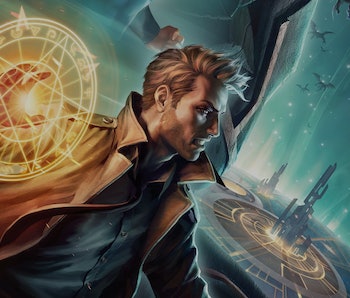 J.J. Abrams is entering the DC Universe. The famed creator of Lost and director of Star Wars: The Force Awakens and The Rise of Skywalker will produce a new DC superhero television series for the new WarnerMedia streaming service, HBO Max.

Here's everything we know so far about the untitled series based on the DC Comics series Justice League Dark. Bookmark this page and come back frequently as we'll update this post as we learn more information.

What is J.J. Abrams doing with DC?

J.J. Abrams is producing a new TV series based on the DC Comics title Justice League Dark. It will stream exclusively on HBO Max, the Warner Bros. streaming service that launched in 2020.

It is unknown at this point if the show shares any continuity with the DC Extended Universe (with movies like Batman v Superman, Suicide Squad, or Birds of Prey) or the television Arrowverse (with The CW shows like Arrow, The Flash, and Supergirl). Of course, we know that the multiverse exists, so it's just as plausible for the Justice League Dark to exist on a parallel Earth separate from everything else we've seen before.

In April 2020, WarnerMedia announced the first three shows Abrams will produce for HBO Max through his production company, Bad Robot. The first is an original show, titled Duster, a period crime drama set in 1970s Southwest U.S. co-produced with LaToya Morgan, whose previous credits include Into the Badlands and TURN: Washington's Spies. The second is Overlook, a new series set in the world of Stephen King's classic horror novel The Shining.

When will Justice League Dark be on HBO Max?

We don’t know when exactly Justice League Dark will arrive on HBO Max. As recent as January 2021, Bad Robot was still in development with the show, meaning the series hasn’t even gotten off the ground enough yet to warrant a release date.

Is there a trailer for HBO Max's Justice League Dark

Nope. We don't expect one any time soon, but we'll let you know once there is one.

Who's in the cast of Justice League Dark?

There are currently no stars announced for Justice League Dark. What further confuses the plot is that several notable members of the group from the comics, including Constantine and Zatanna, have their own projects in the works. So it remains to be seen if these characters will also appear in Justice League Dark or will be limited to those solo projects.

What the heck is the Justice League Dark?

The Justice League Dark is a team of DC Comics heroes with a dark twist. They originate from a 2011-2015 action-horror comic from Peter Milligan, in which superheroes from supernatural origins band together to fight off demonic and ghoulish threats the primary Justice League are ill-equipped to handle.

While the Justice League has familiar faces like Batman and Superman, the Justice League Dark is made up of occult characters like John Constantine, Zatanna Zatara, Deadman, and Shade the Changing Man. Later iterations of the team included Swamp Thing, Etrigan the Demon, and the Spectre. Wonder Woman even led the team in a 2016 sequel series.

Is this the first Justice League Dark adaptation?

J.J. Abrams' TV show is not the first adaptation, nor is it the first time something live-action has been attempted.

From 2016 until now, there have been ongoing developments at a Justice League Dark live-action feature film. Some of the biggest names attached to the project have included Andy Muschietti, Guillermo del Toro, music video director Joseph Kahn, and Edge of Tomorrow director Doug Liman.

In 2017, Doug Liman told Inverse when he was still attached, "The bar is so high for me to do something unexpected. But I feel like I've cracked it down to something I'm really excited about." A few weeks later, Liman exited the project.

In 2017 DC released an animated feature film, Justice League Dark, which took place in its animated universe of direct-to-video movies. At the film's New York premiere, director Jay Oliva told Inverse the DC animated movies are a way to gauge the interest of unfamiliar characters or concepts before an attempt at something in live-action. "The animation we do is a testing ground to see if the public likes it or not," Oliva said. He then revealed that clips from his 2013 DC animated film Justice League: The Flashpoint Paradox helped sell the live-action Flash pilot to The CW.

The film starred British actor Matt Ryan as John Constantine, reprising his role from Constantine's short-lived cult series that aired for one season in 2014. Ryan later returned to playing his part in live-action for Legends of Tomorrow on The CW.