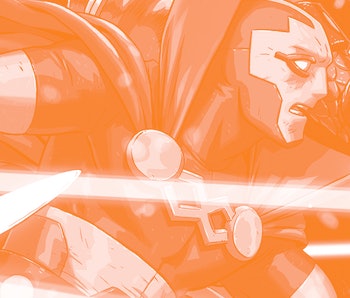 With Harley Quinn: Birds of Prey in the rear mirror and The Batman on the horizon, you might be wondering what else is in the works at DC Film. After all, Marvel Studios' new lineup includes some of the weirdest and trippiest superheroes in its arsenal, so what's DC's answer to The Eternals and WandaVision? Enter: The New Gods.

Back at New York Comic Con 2019, Inverse caught up with legendary comics writer (and ex-CIA officer) Tom King about his first feature film screenplay, The New Gods, a new DC movie based on Jack Kirby's most outlandish creations. Set to be directed by Ava DuVernay, the film does not yet have a release date.

While King naturally couldn't reveal the finer points of New Gods' plot, he did explain one of his biggest challenges he's undergoing with the project.

"I got nothing new except we're in the middle of the process," King told Inverse back in October. "There are words on paper, and they look nice."

King went on to praise his collaborator, director and Oscar nominee Ava DuVernay, who is entering the DC Universe after work on films like A Wrinkle in Time, Selma, and the Netflix miniseries When They See Us.

"I can verify my assumption from the beginning, now that I've seen Ava write, that she's a modern-day genius in storytelling and finding emotional beats," King said. "It's not a surprise but it's a relief to know that your assumption is true."

King then revealed his "biggest challenge" on the project.

"I can tell you the biggest challenge of the whole thing is to make it personal and make it good," he said. "Not make the bureaucracy of Hollywood and comics and all that stuff get in the way of a singular vision of what this story is about, which is about Jack Kirby and his world."

In 1971, Jack Kirby left Marvel for DC Comics in one of the biggest talent shifts in comic book history. The iconic writer/artist was allowed to explore a cosmic, mythological concept he'd been toying with back when he was on Thor. Titled "The Fourth World," Kirby came up with a trio of titles: New Gods, Mister Miracle, and The Forever People, all of which told a story centered on two alien planets, New Genesis and Apokolips, the latter of which is ruled by the evil Darkseid.

While New Gods established the mythos, Mister Miracle introduced Scott Free, an escape artist who learns he was actually the son of Highfather, ruler of New Genesis, but was given up to be raised in Apokolips. When he flees to Earth, he becomes a celebrity escape artist, but triggers a war between the planets. The Forever People, meanwhile, are a group of teenaged New Gods sent to Earth to fight Darkseid. These powerful superheroes can use a Mother Box to join together, Voltron-style, to summon Infinity-Man.

The saga of the New Gods came and went periodically after Kirby left DC to return to Marvel (where he created the similar Eternals). In 2019, the twelve-issue series Mister Miracle, from Tom King and Mitch Gerads, won multiple Eisner Awards including Best Limited Series. Which is why it was so exciting when King was announced as the film's writer in 2019.

In an earlier interview with Inverse at New York Comic Con in 2017, King called Mister Miracle “the most ambitious thing” he’s ever done. “Mitch and I talked about what we want to do. We want to do Frank Miller’s Dark Knight Returns and All-Star Superman, and we said, ‘Can we do that?’”

King and Gerads knew the answer was no, but King added: “But we’d be stupid not to try.”

There is no release date for The New Gods.