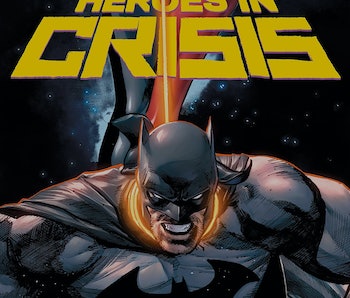 The word “crisis” has a special meaning in DC Comics. It connotes blockbuster storylines and world-altering events that change things forever — see Crisis on Infinite Earths, Infinite Crisis, Final Crisis — at least until the next “crisis” takes place.

But Heroes in Crisis, the new crossover that launched in September, is a different beast. Instead of heroes throwing punches that leave holes in the universe, writer Tom King wanted DC’s heroes to just talk things out.

Heroes in Crisis is a murder mystery that dives into the far-reaching effects of post-traumatic stress disorder, all through the lens of a superhero comic. After the deaths of several heroes within the “Sanctuary,” a facility founded by Superman, Batman, and Wonder Woman for heroes to recover from traumatizing battles, an investigation begins to figure out whodunnit, and why. And unlike most crossover events, the World’s Finest aren’t teaming up just to punch Darkseid in the face.

Sure, there is still punching in Heroes in Crisis, King says. And more experienced readers will probably see shades of 2004’s Identity Crisis, another murder mystery surrounding the death of Elongated Man’s wife. But the acclaimed writer of Batman and Mister Miracle and his team of illustrators — Clay Mann, Mitch Gerads, and Lee Weeks — are digging deeper into the psyches of DC’s heroes alongside its plot, with nine-panel grid pages (a King signature) of the superheroes “engaging” with the reader about what’s bugging them.

The goal, King explains, is that its visual featuring icons like Superman being vulnerable “directly” to the reader can be a vehicle of catharsis.

“I just like the idea, if someone’s having some trouble, [they can say] ‘I can be like Superman,’” King explains.

King can relate to the importance of wanting to feel like a hero. As a former intelligence officer for the CIA, King recalls bringing old comics with him as a security blanket while he was stationed in some of the most intense places around the world.

“When I was overseas in the worst places, I took a comic book with me,” he says. Specifically, “an old Tom DeFalco comic,” Marvel Two-in-One Annual #7 which features The Thing (of the Fantastic Four) in a boxing match against an immortal alien known as “the Champion.”

“It was the Thing getting beat up and getting back up. Comics inspire people,” King says, who wants to make comics worthy of people bringing with them when they’re far from home. “I wanna pay it back, or pay it forward, make it as good as that.”

Heroes in Crisis has yet to reveal the full extent of how it’s addressing the delicate subject of PTSD, but King notes how pop culture media “gets wrong” with trauma and anxiety. “It’s hard to describe narratively,” he admits, explaining that it’s never “1:1.” A traumatic episode with a helicopter won’t just give any person acrophobia.

“It’s like, you had this experience and it got to that part of your brain you can’t reach,” explains King. “You can’t get to it consciously. It’s almost below your conscious. You’ve had an experience in your life, it latched onto you, it latched onto your parents, onto your childhood. It got all stored somewhere you can’t get at, and the only way to get at that place is to just start rambling. Start talking. Bring it out. That’s what Heroes in Crisis is about.”

Thus, the “confessional pages,” as artist Mitch Gerads describes them.

“The heroes are going through things that have shattered them like people have come back from war,” Gerads says. “There’s something so powerful about saying something out loud. You can have all these thoughts and you think you work it through in your head. But saying it out loud physically, that’s what helps. That’s so powerful. Actually spewing it out.”

“It’s super fun to write because it explores character,” King adds. “I did a Black Canary page and you discover the character. The first was just her being quiet and then she goes, ‘Oh fuck this,’ and she walks off. That’s an honest reaction. That’s who she is.”

Ultimately, Heroes in Crisis is a DC crossover of a different nature. Whereas classics like Crisis on Infinite Earths changed canon for decades, Heroes in Crisis is poised to change characters as we know them, revealing new things fans have never seen or even thought of before.

“If we did a story about the universe ending or worlds colliding, everyone would see right through that. That’s every Thursday,” says King. “So we counter programmed. What makes it a ‘crisis,’ Earth-shattering as Marv Wolfman and George Pérez did, is that if you care about it, if you’re emotionally invested in it, if you feel it’s real in your heart. That’s what I’m going for, the emotional connection. Not just repeating those same beats.”

Heroes in Crisis #2 will be released on October 31.