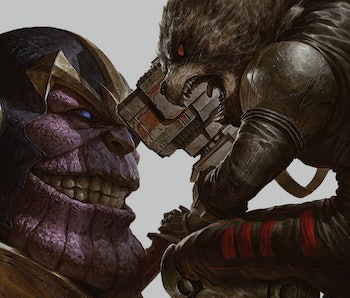 The answer may be staring us straight in the face. Will Thanos return to the Marvel Cinematic Universe in Guardians 3? Recent reports and a deep dive into the comics reveal why this really might happen, and how.

Guardians of the Galaxy 3 vs. What If

Marvel’s upcoming animated series What If...? is designed to tell stories that we’d likely never see in the MCU proper, but the show almost broke its own guidelines in its very first season. In an interview with Southeast Asian news site Kakuchopurei, director Bryan Andrews and head writer A.C. Bradley reveal how they almost copied the plot of Guardians 3 without knowing it.

“I pitched an entire episode. It took me a couple of days to break it. I was very excited about it. I went to Bryan and was like, ‘Here we go, this is what happens, do you think Kevin Feige would approve?’ He went, ‘Oh, yeah, Kevin would love that, that’s half the plot of Guardians Of The Galaxy Volume 3.’”

On one level, this is an interesting story about the complex inner workings of Marvel Studios, but it might also reveal a major clue about the plot of Guardians of the Galaxy vol. 3. After all, if we’re assuming that at least some of What If’s inspiration comes from the original comic book anthology series, it’s possible the episode in question could come from the comics too. And if that’s true, the same mysterious comic would reveal the plot of Guardians 3.

Unfortunately, the What If comics date back to the 1970s, so there’s a lot of material to work with. But lucky for us, one recent issue seems like an obvious choice to inspire Guardians of the Galaxy vol 3.

Guardians of the Galaxy 3: The return of Thanos?

In 2015, Marvel released What If Volume 12. The series explored various alternative outcomes from a 2012 Avengers plotline in which the superhero team faced off against both Thanos and an ancient race of aliens called the Builders. (In one scenario, Norman Osborn gets the Infinity Gauntlet.)

Those details don’t really matter, though. What matters is the events of What If? Infinity- Guardians of the Galaxy #1.

In the comic, Rocket recounts a showdown with the Illuminati (a secretive group of superheroes that includes Iron Man, Doctor Strange, Namor, Richard Reeds, and others). After discovering that the Illuminati are keeping Thanos locked up in a secret temple, Rocket steals Iron Man’s suit and infiltrates the group. He then proceeds to fight the Illuminati (with the help of his fellow Guardians) before freeing and then killing Thanos.

Here are a few memorable moments from the comic, including the cover and some clever fakeouts:

So assuming this is the What If story that Bradley wanted to use — only to discover that it was already in the works for a movie — what does this mean for Guardians of the Galaxy 3? Well, for one thing, it could mean that Thanos will return, either thanks to the multiverse or through some other comic book shenanigans.

But, perhaps more interestingly, the upcoming movie could give the Guardians a new squad to fight against (their brief showdown with the Avengers in Infinity War is still a classic for a reason). Rumors that the Illuminati would appear in the MCU have been swirling for a while now, and with a Fantastic Four movie confirmed and Namor heavily rumored for Black Panther: Wakanda Forever, the pieces are quickly falling into place.