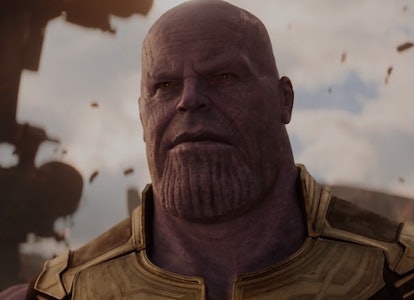 Thanos was a villain of biblical proportions. His might, his presence, loomed over the Avengers universe for years, and the effects of his actions will probably loom over the MCU forever. You can’t just kill off half the population of Earth (albeit temporarily) without having a reputation to last generations. This theory makes Thanos’ biblical status even more powerful, with terrifying ramifications for the MCU.

The Theory — Redditor u/thecircularblue posits that Thanos’ most famous catchphrase, “I am inevitable,” isn’t just a grandiose statement akin to “now I am become death, the destroyer of worlds.” It’s actually a reference to the Bible in disguise.

It’s no secret that Thanos has a God complex, but it was always in the vague sense, not in the Judeo-Christian Old Testament God context. But the “I am inevitable” line echoes God’s first introduction to Moses on Mount Sinai in the book of Exodus: “I am who I am. This is what you are to say to the Israelites: ‘I Am has sent me to you.’”

When Thanos says “I am inevitable,” there’s a pause before the last word. Maybe he’s not actually saying “I am unstoppable,” but rather “Becoming God....inevitable.”

However, this would mean that Thanos would need to have a more than surface-level knowledge of the Bible, begging: the question — just how much about Earth culture did Thanos know?

Thanos Studied Up — In Infinity War, when Thanos confronts Tony Stark, it’s obvious he has knowledge of who he is and his role as an Avenger. He tells Stark: “You’re not the only one cursed with knowledge.”

If he’s equating his knowledge to Tony Stark, self-proclaimed genius, then he’s clearly done his homework on Earth culture and religion.

So what does a Thanos brushing up on his Sunday school lessons mean for the MCU? Well, if he knows about the Old Testament, he knows about the God featured in those stories: the vengeful, judgmental, righteous anger-filled God. He would know about Noah’s Ark, which was even worse than the Snap. Wouldn’t that mean the population of Earth would be open to a second hard reset of the world’s population?

Thanos may have overestimated the appeal of that one.

The Inverse Analysis — While it doesn’t make the Snap any less heartbreaking, it’s interesting to examine the motivations behind Thanos’ actions. He wasn’t looking to become a god, he was looking to become The God, which is even more terrifying — and probably very sacrilegious.