Hooked on a feeling

'Guardians of the Galaxy 3’: James Gunn teases a huge change for the MCU

“This is the end of the road” 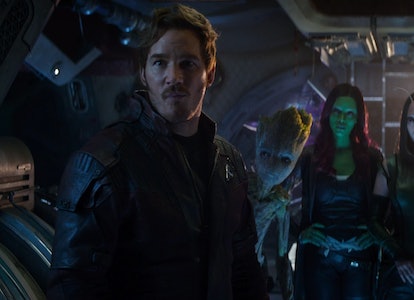 It’s the end of the Guardians of the Galaxy as we know them. The Guardians have been an integral part of Marvel’s Cinematic Universe ever since their big-screen debut in 2014, but the team’s time together may be ending sooner than fans thought.

Dave Bautista has already said he won’t be returning to play Drax the Destroyer after 2023’s Guardians of the Galaxy Vol. 3. Now, some new information suggests that Drax won’t be the only member of the ragtag team who disappears from the MCU after that film’s release.

The Farewell Tour — During a recent Instagram live Q&A, Guardians of the Galaxy Vol. 3 writer and director James Gunn hinted that the long-awaited Marvel sequel will be the last to feature the Guardians in their current form. Speaking about both his and the Marvel team’s future in the MCU, Gunn said, “This is the end of the road for me, and even more so for this group of guardians.”

The filmmaker’s comments imply that the Guardians may cease being a team in the MCU after Vol. 3 or will at least undergo a serious lineup change/reformation — and that’s not very surprising.

Guardians of the Galaxy 2.0 — It makes sense that, three films into the Guardians franchise, Marvel may want to retool the series with a new group of lead characters. That’s what the studio is reportedly doing with Captain America 4 and it may very well adopt a similar tactic for the Thor and Ant-Man franchises after their forthcoming installments.

Revamping well-established teams with new members and leaders is something comic books have been doing for years. In fact, practically every major team in the Marvel comics has had their rosters altered multiple times. The Guardians of the Galaxy are no exception.

Over the years, characters like Nova, Adam Warlock, Beta Ray Bill, Moondragon, and Hercules have been members of the cosmic team. Rocket Raccoon and Nova have even stepped up to be the leader of the Guardians at different points in the comics, which could happen if Chris Pratt ever leaves the MCU.

Meanwhile, the ending of Guardians of the Galaxy Vol. 2 explicitly set up the introduction of Adam Warlock in Vol. 3, and Nova and Hercules are two characters who have long been rumored for the MCU. The introduction of any of those three heroes — among others — could easily build towards the formation of a new Guardians of the Galaxy, one that may feature a mix of both new and original members.

The Inverse Analysis — Based on the recent comments made by both Dave Bautista and James Gunn, it’s looking increasingly likely that Guardians of the Galaxy Vol. 3 will mark the end of the current version of the team. That doesn’t mean the Guardians franchise as a whole has to come to an end after Vol. 3 though, and fortunately, Marvel has plenty of opportunities to create a new version of the Guardians in the coming years.

Upcoming MCU titles like Eternals, Secret Invasion, and The Marvels (not to mention Guardians 3) all have the potential to introduce cosmic characters that fit right in as members of the Guardians. Don’t be surprised if that’s exactly what ends up happening.