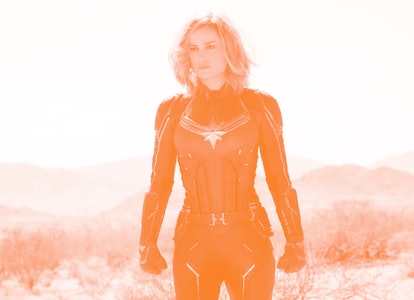 Ever since Marvel launched its television lineup with WandaVision, it was unclear just where the Disney+ series would fit in the greater MCU moving forward. Would they be extra enrichment of the stories that don’t get their due on the big screen, like how WandaVision fleshed out the romance between Wanda Maximoff and Vision? Would they act as a prologue to later movies, but prove unessential?

The news of the Captain Marvel sequel, entitled The Marvels, puts this issue to bed once and for all — in the best way possible.

Captain Marvel, Too — Marvel Studios announced an official title for its second Captain Marvel movie: The Marvels, suggesting an event bigger than just Carol Danvers. What’s more, it shines a light on how the Disney+ shows are going to factor into the greater MCU.

Marvel’s Kevin Feige has stated from the start that the Disney+ series would lead into movies, but it was unclear how. Yes, WandaVision will lead into Doctor Strange in the Multiverse of Madness, but will Wanda’s appearance be a cameo or a major role? It was also said before the show even premiered that the upcoming Ms. Marvel series would lead directly into the sequel of Captain Marvel, but it was anyone’s guess how.

Now we have a title, The Marvels, and what’s more, we have title art. The “s” in Marvels is lifted straight from the “s” in the logo for Ms. Marvel, so obviously the role of Ms. Marvel is more than just a cameo from Kamala Khan. She’s now not just Ms. Marvel, she’s one of The Marvels.

Make Mine More Marvel — The title hints at even more than Kamala Khan. If the film was just focused on Captain Marvel and Ms. Marvel, then it would probably be titled Captain Marvel and Ms. Marvel, akin to Ant-Man and the Wasp or The Falcon and the Winter Soldier. The Marvels implies there may be a third member of this all-female super squad, someone Carol Danvers knows very well: Monica Rambeau.

Monica discovered her own unique powers while traveling through the Hex in WandaVision, and is primed to become a superhero in her own right. She shares trauma with Carol through the loss of Maria Rambeau, and would share the newbie superhero experience with Kamala.

Whether or not Monica has a starring role in The Marvels, it’s our first official confirmation that the events of the Disney+ series are not optional viewing. They’re as valuable to the MCU as any other film. While it’s certainly possible to watch, say, Avengers: Endgame without watching Ant-Man, it makes a lot more sense to have the context of both. Now, we know that’s true for the Disney+ series as well.

So if you’re a Marvel fan who is passing on the TV series out of fear they’ll be inessential like the Netflix shows or Agents of S.H.I.E.L.D, let this news serve as a reassurance that these series aren’t just fun, experimental ways to play with the Marvel movie model. They just might be the future of the industry itself.

The Marvels premieres in theaters on November 11, 2022.

More like this
Entertainment
Jan. 25, 2023
The MCU could bring back a hero from its most underrated TV show
By Dais Johnston
Entertainment
Jan. 26, 2023
Corey Stoll could have the chops to make a live-action M.O.D.O.K. work
By Mónica Marie Zorrilla
Entertainment
Jan. 30, 2023
Doctor Who Could Become the New Marvel — But There's a Catch
By Ryan Britt
LEARN SOMETHING NEW EVERY DAY.
Related Tags
Share: