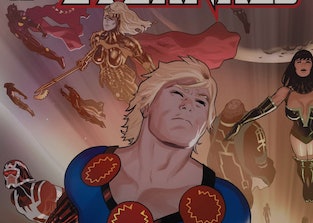 Who are the Eternals? 5 burning questions about the Marvel movie, answered

Don't ask us how we know, but we know some of your most burning questions about Marvel's history-sweeping epic, Eternals. And no, we don't just mean "When is its release date?" (November 5.)

Originally meant to open in theaters in November 2020, the ensemble Marvel sci-fi blockbuster was delayed for a year for... obvious reasons. But even without a trailer, curiosity over the Eternals and their place in the Marvel Cinematic Universe has never wavered. Who are the Eternals? What is their deal? Are they immortal? Do they know things? (Let's find out!!)

We'll know all we need to know come November when the film from Chloe Zhao is finally released. But until then, here's what we definitely (kind of) know about Marvel's next superhero team: the Eternals.

5. Who is the leader of the Eternals?

Game of Thrones alum Richard Madden will star as Ikaris, the tactical leader of the Eternals. In the comics, Ikaris was born 20,000 years ago in an area now known as Siberia.

Once, when the Celestials sank the mythical land of Lemuria, Ikaris guided a ship of humans to safety. The primitive humans believe Ikaris to be a bird, and thus human history records Ikaris as the bird that guided Noah's ship.

Ikaris got his name from the death of his son. The Marvel hero, who at the time didn't have a name of his own, married a human woman in ancient Greece and together they bore a son, Icarus. Icarus loved to fly, but without powers of his own, his father created mechanical wings for him to fly. But when Icarus flew too high and falls to his death, his father adopts the name "Ikaris" in his memory.

Ikaris has all the standard-issue superpowers an alien superhero would have, including super strength, speed, stamina, durability, faster healing, cosmic energy manipulation, and flight.

The official character summary for Ikaris, released by Marvel Studios for the Eternals toy line, summarizes Ikaris as thus:

"Ikaris is the tactical leader and most powerful Eternal and takes pride in keeping the other Eternals safe. Moral, kind and charismatic, Ikaris boasts the power of incredible strength, flight and the ability to project beams of intense cosmic energy from his eyes. When the monstrous Deviants return after centuries, Ikaris leads the charge to unite the scattered Eternals to stop the new threat."

4. Can the Eternals die?

Generally speaking, the Eternals are immortal. This is why the Eternals will have lived on Earth for thousands of years when we meet them in this year's movie. But Eternals can die. Marvel Directory helpfully points out that an injury that disperses an Eternal's body molecules, or an Eternal losing their mental hold over their body can lead to their death.

There are only two known means by which Earth Eternals can die. One is through an injury that disperses a significant portion of the Eternal's body molecules; the other involves overwhelming and breaking the Eternal's mental hold over his or her own body. Once this hold is broken, then the Eternal can be injured or killed through conventional means.

Marvel Directory also points out that Eternals can alter their physical appearance. Despite being thousands of years old, they can appear to be as young or old as they want. This is why the diverse cast of Eternals range wildly in age:

An Eternal's control over his or her body allows him or her to appear at whatever age he or she wishes. Hence, although many known Eternals have lived for at least several thousand years, they appear to be in their twenties. Cosmic energy bolsters the metabolism of Eternals so they do not tire from physical exertion. Through mental concentration they can resist temperature extremes.

3. Who killed the Eternals?

In Jason Aaron's Avengers, which started in 2018, Earth's Mightiest Heroes assembled in a storyline revolving around the "Dark Celestials," a group of corrupted ancient aliens who were the forerunners to the Eternals.

Off-panel, the Eternals learn they weren't made to be humanity's protectors, but a disease to destroy "the Horde," a species of alien bugs. This led to the Eternals going insane, driving themselves to kill each other en masse. In one fell swoop, the Eternals were gone. All of them.

But fret not! A new Eternals comic book from Kieron Gillen and Esad Ribić has just arrived, picking up from their devastating revelation. It's unclear whether the upcoming movie will borrow more from Aaron's comic, Gillen's new one, or another plotline entirely.

2. Is Thanos a Celestial?

Strictly speaking, no. Thanos is not a Celestial. However, he is an Eternal. Kind of.

In the Marvel Universe, Thanos hailed from the ruined planet of Titan (itself based on Saturn's moon). Titan was home to many Eternals and their sworn enemies, the Deviants. In ancient times, the Celestials conducted experimentations that created two rival species: The beautiful, noble Eternals, and the ugly, monstrous Deviants. This conflict will be what audiences see in the movie Eternals.

Thanos' parents, two Eternals named A'lars and Sui-Sana both carried a mutant Deviant gene that manifested in Thanos. (It did not manifest in his brother Eros, a.k.a. Starfox, but Starfox was a creep, so screw him.) Because of this, Thanos is considered a hybrid of Eternal and Deviant, even though their lineage is mixed anyway as both were creations of the Celestials.

But is Thanos a Celestial himself? No.

1. Are Eternals stronger than Avengers?

As the Celestials created Eternals to protect Earth (or so they thought until recently), the Eternals do wield special superpowers that are comparable to the Avengers. The powers available to Eternals include superhuman strength, energy projection, flight, mind control, illusions, teleportation, force-field generation, and more.

Unique to Eternals are that they can specialize in a certain power, and tailor them to their own interests. Makkari, who will be played by Lauren Ridloff in the movie, uses the cosmic energy available to Eternals to possess superhuman speed. Another Eternal, Interloper (who lives alone in Siberia, and may not appear in the movie) has the power to generate fear that causes his enemies to flee.

More like this
Culture
5.11.2022 12:00 PM
You need to watch the most unique time-travel epic ASAP
By Eric Francisco
Entertainment
5.24.2022 8:39 PM
Thor: Love and Thunder trailer reveals a huge Endgame twist with one short line
By Dais Johnston
Entertainment
5.24.2022 10:00 AM
Moon Knight writer explains why Mister Fantastic should be "a badass" in the MCU
By Eric Francisco
Related Tags
Share: