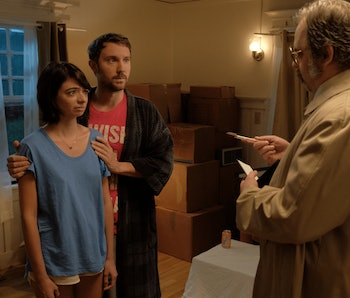 Telling cult stories can be difficult. On one hand, you want to portray how easy it is to fall prey to high-control groups no matter how preposterous they may seem. On the other hand, you still want to distance the narrative from the cult so it doesn't look like you're condoning the actions of the group. There are a handful of ways to get around this dilemma, but one movie streaming for free on Tubi managed to escape this rock and hard place with one simple decision — making it a comedy.

The film starts off strong, showing a very bearded Taika Waititi as Reginald Storsh, who sings a song about eternal life and then addresses the camera directly with a charming but sinister message — why wait 75 or 80 years to die when you could achieve eternal bliss right now?

Taiki Waititi as "The Holy Storsh" in the cold open of Seven Stages to Achieve Eternal Bliss.

After the cold open, we're introduced to our protagonist. The criminally underrated Kate Micucci plays Claire, a young hotshot ad executive who moves to Los Angeles with her deadbeat boyfriend Paul after landing her dream job. They manage to find a cheap apartment with a great location, and happily move in, thinking they've finally got their lives together.

Then, a random stranger with a spiral on his head kills himself in their bathtub.

They call the cops, and Detective Cartwright answers the call. Cartwright, played by Community and Rick and Morty mastermind Dan Harmon in a rare acting-only role, is a long follower of the case and fills the couple in on the hitch in their dream home. "From time to time, members of a deranged cult break and enter in order to commit self-murder. Did the super not go over this with you when you looked at the apartment?" he asks.

While at first, it seems like a dealbreaker, Claire and Paul learn to overlook the ritual, seeing it as just another part of living in a big city. Claire starts thumbing through Storsh's book, and slowly realizes some of the advice Storsh gives out is actually kind of useful.

It's at this moment the plot takes a turn for the worse, but the storytelling is all the better.

If this film were just the story of two people dealing with a mess in their bathtub every couple of days, then it wouldn't be notable at all. By posing it as the gradual ramping up of influence, the escalation can reach frightening — and hilarious — heights.

Even though Seven Stages to Achieve Eternal Bliss is a comedy, there are distinct elements that make it work equally well as a dissection of cults in general. Research has shown that people in big transitions in life (like a new job or moving) are especially susceptible to extreme beliefs. The gradual escalation and reasoning behind Storsh's actions are also accurate to cult leader's tactics.

With all that careful-but-comedic plot structure, Seven Stages goes even further to cement itself as a must-watch with an all-star cast. Aside from Waititi, Micucci, and Harmon, character actors like Maria Bamford, Mindy Sterling, and Brian Posehn all make appearances. Better Call Saul's Rhea Seehorn even lends her talents to play a malicious gold-digger politician who hires Claire's agency to handle a PR disaster.

All these elements, plus an original song by The Flaming Lips make this film a breezy (if murderous) watch. It asks difficult questions about what lures people into belief systems without completely losing its comedic tone. You'll find yourself thinking critically about the true nature of belief and happiness without even realizing it, a trick that cults have been using for decades.

Thankfully, here it's all in the spirit of comedy.

Seven Stages to Achieve Eternal Bliss is now streaming on Hulu and Tubi.

More like this
Entertainment
6.19.2022 11:30 AM
You need to watch the best monster thriller of the '90s before it leaves HBO Max next week
By Mónica Marie Zorrilla
Entertainment
11 hours ago
40 years ago, Harrison Ford's biggest sci-fi flop inspired a cyberpunk revolution
By Ryan Britt
Entertainment
10 hours ago
'Rings of Power' video sets up the return of Tolkien's most underrated creatures
By Alex Welch
Related Tags
Share: