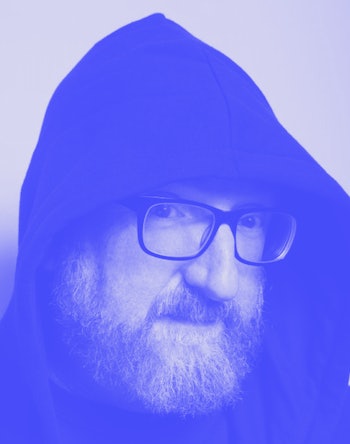 Sadly, Brian Posehn is not in The Mandalorian Season 2.

“I wish! I argue that my character could still be alive,” he says of his unlucky speeder driver on the Star Wars Disney+ series. “You never seen him consumed by that creature. It knocks my ship into the ice and then goes immediately after the Mandalorian, so I think I could be clinging to life, you know, hanging onto my ship. I mean, Boba Fett made it out of the Sarlaac pit.”

On Saturday, September 19, the comedian will host an interactive comedy special, Brian Posehn Live: An Evening with Grandpa Metal. It’s a celebration of his first all-music album, released in February, which features a pretty mindblowing group of collaborators, including Anthrax's Scott Ian and Jonathan Donais, Fall Out Boy’s Patrick Stump and Joe Trohman, Dokken's Jeff Pilson, Weird Al Yankovic, Dethklok's Brendon Small, and Slipknot's Corey Taylor. (You can get a ticket right here.)

“It'll be stand-up, but a lot of it is meant to feel like a huge green room, where people kind of hang out,” Posehn tells Inverse of Saturday’s event. “We’ll play some songs with my band — basically, it's Scott Ian, Brendon Small, and Joe Trohman. Then we'll hang out with people, answer questions, and toast and just do like greenroom things. It’ll probably be more time hanging out than actual stand-up.”

Other people would probably say “the weird kid,” but I didn't think that. I was well-read, mostly happy, raised by a single mom. I got into comedy pretty early. I loved riddles and jokes when I was, like, nine and 10 years old. I was already obsessed with Steve Martin and Robin Williams right around that age.

Van Halen or AC/DC. Women and Children First was my favorite Van Halen record, and then Highway to Hell was my my favorite AC/DC record.

But I was so into music, I had a million favorite bands. By the time I was 16, things were changing and my tastes were getting heavier, like Iron Maiden and Judas Priest. I was 17 when Metallica came out and just instantly got obsessed.

My style was basically “preppy dork.” My mom dressed me, and she wanted desperately for us to be preppy. We were from Connecticut, and her family was wealthy, but she worked for the state and we lived in a small apartment. She wanted me to wear Izod shirts and Sperry Top-Siders all the time.

I hated it. I started wearing rock T-shirts to school, junior year. Senior year, I probably only wore rock T-shirts.

I was working on Mr. Show at the end of the 90s, and we had internet there to do research. But then I found eBay and was immediately like... “this could be bad.”

The first thing I bought on eBay, I got ripped off. I bought a banned DC comic book, where a babysitter tries to kill baby Superman by putting him in a microwave. So I found somebody in the U.K. that was selling it, and I spent more than I should have. I never got the book.

I still use eBay all the time, but it's regulated better now. In the early ‘90s, people could scam you very easily. I buy a lot of vinyl. But I'm still looking for Superman in a microwave.

Anything I knew about love was all from rock songs. Maybe Van Halen, AC/DC, and Scorpions were probably not the best place to learn about love.

Mrs. Gardner. She was an English teacher — I had her for a couple of classes but the thing I loved the most was creative writing. That was my favorite class I had pretty much the whole four years.

Mr. Show, for sure. I had other jobs before, but Mr. Show’s the thing that I'm still living off, I feel like. I don't think I would have ever gotten Big Bang Theory or Just Shoot Me, or some of the paying gigs I’ve done if I hadn't been with those guys.

When I moved down here, I was already friends with David Cross. They just finished The Ben Stiller Show, and I'd seen a couple episodes. I loved what they were doing. I was already starting to write sketch, because at the beginning of the ‘90s stand-up was starting to die. Unless you were a headliner, you were going to be screwed. So I kind of panicked, thinking I gotta move to LA and I gotta write.

It happened kind of at the right time. I met Bob Odenkirk immediately after moving down her, at the old virgin record store. I was wearing a Sub Pop loser jacket, I had super long hair, and I'm kind of a stony, surly dick to him. He thought it was funny that I was an asshole and thought he was weird. We're both socially awkward dudes, and we became friends. Next thing I know, I'm writing on the show.

I got on a show right after Mr. Show called The Army Show. It was a great cast — Mary Lynn Rajskub from 24 and Mr. Show; Ivana Milicevic, who was in Banshee and Casino Royale, and Dave Foley, Dave Higgins — the cast was really funny.

We were on for a year, and then we went away. And I spent all the money and then the next year was not so great. And so I kind of learned I learned a lesson there — don't go crazy, don't overspend, and know that these things aren't going to be forever.

I'm just trying to get through the next 50 days! 2020 has been a kick in the teeth. Just relentless. Without getting political, I just want to get past this year. I lost my mom in December. I couldn’t imagine things were gonna get worse. I had no idea. But it is what it is.

My 15-year-old self would get all into Grandpa Metal because I was so into things that combined being funny with metal. Whenever Spinal Tap came out, I didn't like it because I didn't think they were truly metalheads. I was kind of mad that they were making fun of metal. But Grandpa Metal, I think you can see there's love there. It's made by metalheads for metalheads.