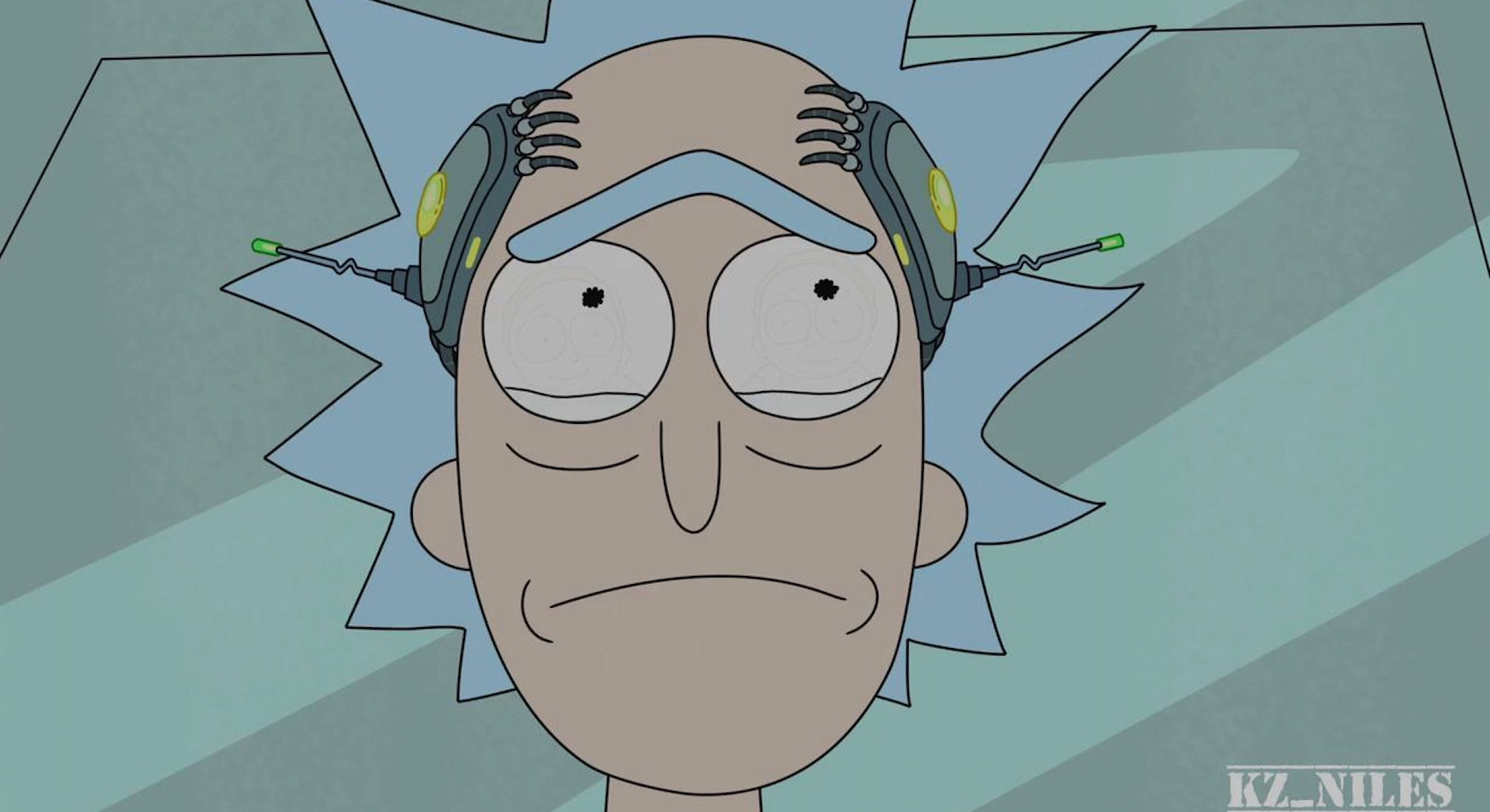 Rick and Morty, the biggest hit Adult Swim has ever seen, encapsulates the network’s unique collection of playful, edgy, somber, and recalcitrant programming in a single sitcom. Co-written by Dan Harmon and Justin Roiland, the 30-minute animated series is as wacky and chaotic as it is heartfelt, and it’s that magic combo that has captured millions of fans. Rick and Morty is more intelligent than the average animated comedy, and more sexual and profane than the average science fiction serial. It has also succeeded in only two seasons in creating, fleshing out, and complicating a standalone set of rules in canon: it comments on its own structure without feeling too high-brow, and its creators are aware of all its tiny moving parts.

In a phone interview with Inverse, Harmon and Roiland described how they maintain a balance between sweet and vicious in their writing. They guessed at what makes their protagonist Rick Sanchez so evocative for so many depressed, smart people, and urged obsessive fans trying to decode the show’s little hints that they’re in the right place. They want people developing theories about easter eggs and rewatching old episodes; they just don’t want to hear about it.

How do you keep things balanced? When do you know that an episode needs a note of realism, and when are you allowed to go nuts with a joke?

Justin Roiland: The answer is, one follows the other. I belong to the school of thought that maintains comedy is, at its heart, about terror. It starts with a game of peekaboo, right? Your mom covers her face and you believe that she’s disappeared from the earth entirely. She opens her face back up, she says peekaboo, and though the world was just ending a second ago, it turns into a laugh.

Life is tragic but comedy reminds you that life goes on. You get the last laugh on the things that terrify you. In order to get visceral laughs from your writing, you need to go where things are terrifying. I think people sometimes mistake that for pure nihilism or toxic, dark comedy, but there’s a way to do it with a purpose. You try to alleviate that terror and say everyone feels the same, everyone’s scared that this all means nothing in the end.

You’ve said that in Season 2, you didn’t want the show to circle back on itself, so you avoided too many callbacks. Can we expect references to earlier things in Season 3?

Justin: We’re definitely having a running continuity that we respect in the show. We don’t pretend to reset things completely. There are things that now shape the show moving forward, and the environment and characters have changed forever, because of ccertain events. Relationships change…

That’s an important thing to us. We write as many evergreen, standalone episodes as we can, but we are alway respectful of the continuity and that all actions have consequences and that there’s weight to those consequences. I’m trying to think of specific references in Season 3, aside from the pilot, which was specifically referencing previous events. I feel like the material is all fairly new as we plow ahead.

This is the biggest hit Adult Swim has ever had - what’s your relationship with the network like? Do they ever tell you no anymore?

Dan: Well, we were a year behind schedule. I guess getting away with that comes from a good relationship.

Justin: [Adult Swim Executive Vice President] Mike Lazzo is so supportive. I can’t even believe how much. He’s such a huge fan of the show, and his notes are always really on point, and it’s usually a pretty legit thing he’s catching. Or it’s something he’s thinking about and we recognize it as a good thing to bring up. He says, “You guys know what you’re doing.” The creative freedom is incredible. I mean, this is my first crack at a TV show… I know Harmon…with Community, it just wasn’t like that at all. Right?

Dan: No, of course not. It’s insane the amount of stuff the network does on its own to support the show, things we don’t even have a chance to approve of, but then we marvel at how faithful and clever their promotions are. It’s an unprecedented creative network for me.

Is this the kind of show where fan theories and guessing at patterns is worth it? Do you plant clues for later reveals?

Justin: I think it’s normal and human and fun for fans to theorize and try to connect the dots. They’re gonna do that no matter what, and I like to let them. I don’t wanna get in the way. I get canonical questions, people asking us to put an end to a debate… You know, they’ll say, there’s 3 camps that believe certain things. I avoid answering things because I like that the fans are…well, they have their thing, they get to have that.

A lot of times, we don’t even know! We honestly haven’t thought that deeply about certain theories. I also tend to avoid diving into stuff on Reddit. I’m on Reddit a lot, but I look at dumb stuff and just skip past the deep fan theories. It’s bad to have that stuff sticking around my subconscious. The goal is to hit that fresh canvas feeling we had in Season 1, all those ideas coming straight from our brains and not potentially things that came up from reading all the fan theories.

Dan: If you think about it, the showrunner and the fan are at cross purposes. Decoding and theorizing, that’s a fan at their best and highest form when they’re thinking about the show on a level that the showrunner at peak form just isn’t.

The best way I’ve been able to put it is, if you ask your parents, “Are we going to the zoo tomorrow?”, and if they say, “I don’t know yet,” they’re kind of being bad parents. If you ask a showrunner, “What state was rick born in?”, that’s a good showrunner who says, “I don’t know yet.” You want people to feel that affection for a show, but you don’t actually want all your answers determined at the beginning of some conference, six years before they’re important to the plot. We’re very dedicated to canon, though, and we try as hard as we can not to contradict and keep things sacred.

Rick and Morty Season 3 will continue on Adult Swim July 30.