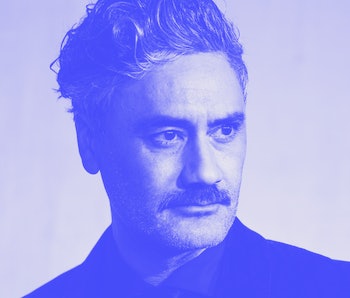 Taika Waititi is a sacred name among both Marvel and Star Wars circles. He directed and voice acted in both Thor: Ragnarok and Episode 8 of The Mandalorian to much acclaim. His next projects include Thor: Love and Thunder and a Star Wars movie, though we know little about either project. Luckily, a beloved actor dropped a pretty tantalizing clue in a recent interview.

In conversation with Insider, Thor: Ragnarok scene-stealer Jeff Goldblum was asked about possibly appearing on The Mandalorian. While he didn't rule out the possibility, he teased something much bigger. "We've talked about doing something else that has to be secret right now but I would do anything with him, sure," Goldblum said.

It's unlikely Goldblum will appear in The Mandalorian anytime soon, considering Waititi isn't directing any episodes in the upcoming second season, and has no known plans to return to the esries. This "secret" project, however, may be in the same universe — Waititi's Star Wars movie.

Between The Fly and Jurassic Park, Jeff Goldblum is a titan of science fiction movies. An appearance in the Star Wars universe would further cement his role as a national treasure, and add the distinct comedic quality we saw in his turn as the Grandmaster in Thor: Ragnarok to what is sure to be a Star Wars film unlike any other. Considering how Taika is just now writing the script, it absolutely could be something they've discussed.

Speculating on a possible role for Goldblum to play is difficult, especially since we don't know when in Star Wars's millennia-long timeline it occured. With his previous villainous role as The Grandmaster, he could play the antagonist, but it's difficult imagining him next to Darth Vader and Palpatine in the lineup of Star Wars villains.

If this movie is a further continuation of the sequel trilogy, perhaps he could act as a veteran rebel fighter from the Original Trilogy movies, working as a mentor like Luke and Leia did for the new crop of heroes. Of course, knowing his enthusiasm in working with Waititi, he would probably be happy playing a cantina owner or even a droid.

The secret project might be Star Wars, but there are other opportunities as well. Aside from that film and Thor: Love and Thunder, Waititi is also working on a new animated series adaptation of Roald Dahl's classic book Charlie and the Chocolate Factory. Could Jeff Goldblum lend a voice to Willy Wonka himself? Regardless, any project combining Jeff Goldblum's charm and Taika Waititi's distinctive playful visual language is sure to be a hit.