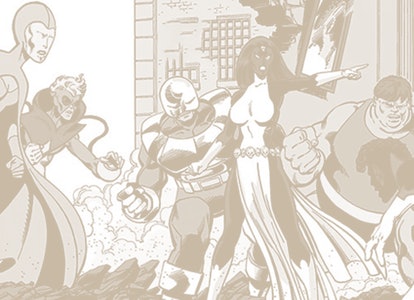 Ever since we learned The Falcon and the Winter Soldier was heading to Madripoor, we’ve been wondering whether the fictional Marvel city would introduce Mutants into the Marvel Cinematic Universe. But one semi-disappointing episode later, we’re no closer to seeing X-Men in the MCU — or are we?

A new theory reveals that Falcon and the Winter Soldier may have already introduced one of the most iconic X-Men characters of all time, and we didn’t even realize it. (Warning: Possible spoilers ahead!)

According to popular Marvel TikToker @supes, that’s exactly what happened. But how do you hide a mutant in plain sight? By picking one with shapeshifting powers. Enter: Mystique.

As @supes points out, Mystique could be disguised as none other than Sharon Carter. It might seem too dumb to be true, but wait! Before you stop reading, here are two reasons why this Falcon and the Winter Soldier is a lot smarter than you might think.

Earlier this month, Marvel unveiled a promotional Madripoor website, letting fans explore the Falcon and the Winter Soldier location. However, it wasn’t long before fans uncovered some hidden data on the site referencing Mystique along with Daken (Wolverine’s son), Shang-Chi, and Krakoa (a different, sentient island in the Marvel comics).

Marvel scrubbed the website of these references, but the damage was already done. It seems clear that the MCU’s version of Madripoor is closely linked with Mystique, whether she shows up in Falcon and the Winter Soldier or some other upcoming story.

1. Something’s off with Sharon Carter

In an earlier article, I pointed out that the version of Sharon Carter we met in Falcon and the Winter Soldier is a pretty huge change from the character we knew in earlier films.

This isn’t exactly unheard of in the MCU. After all, Marvel changed Thor dramatically in Ragnarok, and the Zemo we know now is a far cry from the one in Civil War. Still, something is clearly up with Sharon. So why not this?

Sharon’s allegedly been hiding out in Madripoor for years. It would make sense if she was actually just Mystique in disguise, using Sharon as a cover to gain trust and amass power. It’s also extremely in line with Mystique’s character, who constantly takes on other identities to trick those around her.

Maybe Mystique needs to take down the Power Broker and she’s tricking Sam and Bucky into doing it for her. That would also explain why she’s uninterested in joining them on their adventure since it would mean staying in her Sharon Carter disguise indefinitely.

The Inverse analysis — Is this theory a huge stretch? Absolutely. But with a major Marvel cameo expected in Falcon and the Winter Soldier Episode 5, this seems like as good an idea as any. And until Marvel actually reveals X-Men in the MCU, you can’t blame us for looking for mutants in weird places.

More like this
Entertainment
Jan. 25, 2023
The MCU could bring back a hero from its most underrated TV show
By Dais Johnston
Entertainment
Jan. 13, 2023
Mike Colter would "entertain" the idea of coming back to Luke Cage
By Hoai-Tran Bui
Culture
Jan. 18, 2023
The Mandalorian Season 3 will finally solve a huge Star Wars mystery
By Ryan Britt
LEARN SOMETHING NEW EVERY DAY.
Related Tags
Share: