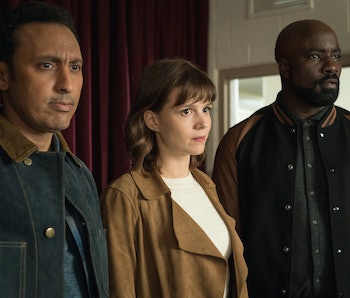 Filming on Evil Season 2 is already underway. However, fans are still trying to piece together the alternate reality game (ARG) introduced in Season 1. Co-showrunner Robert King has hinted that the clues to solve the ARG reside in Evil’s episode titles (all of which include at least one number) and the episodes themselves. While the puzzle remains unresolved for now, additional Season 2 clues could reveal exactly where the puzzle’s map will lead.

In an early episode of Season 1, a priest tells David Acosta that “God draws in straight lines. The devil draws in puzzles and anagrams.” On the surface, this line of dialogue merely implies that the devil’s intentions are much harder to decode. After all, Lucifer’s history isn’t so cut and dry, so why should his plans be?

However, it also serves as a meta moment for Evil, whose showrunners have been orchestrating this unique experience for the audience over several months. So far, fans have found 67 clues. Speaking with Entertainment Weekly, King had this to say about the show's mysterious puzzle.

“There is a puzzle approach with the whole season. It’s a combination of the numbers and other things you can find within the episode. It’s a fairly complicated puzzle. There is a pattern, and it won’t come together until the last episode. It’s not something you can figure out along the way, even though you should be keeping track.”

Fans on Reddit have taken the bread crumbs littered throughout Season 1 and placed them over a map of New York City. Each clue has led to a series of red lines and boxes that seemingly work as a blueprint to finding the answer. While King hinted that the puzzle would be resolved by the Season 1 finale, fans aren't convinced, and have continued to sort through the clues in the hopes of more insight to come in Season 2.

All that said, it’s possible that the ARG is far from over. Most of the red lines on the map seem to be marking distinct locations in the city — buildings, shops, bridges, etc. Meanwhile, the light red and black lines are focused on specific streets and routes. Perhaps Season 2 will add more clues that will ultimately lead fans to the devil’s lair.

In Season 1’s penultimate episode, Leland Townsend’s therapist was revealed to be a goat-like demon complete with creepy horns. What’s more, David had a vision of Kristen walking toward the horned demon (now carrying a scythe) in the Season 1 finale. The Season 2 trailer has already implied that something isn’t quite right with Kristen, with fans speculating that she could already be possessed.

If she’s being led to the demonic entity, then perhaps the map’s clues will reflect what’s going on in Evil’s second season. The series enjoys taking its audience on a twisted journey and it would be really trippy if the fans discovered the devil’s lair right before Kristen was lured there by Leland (or the demon) herself.