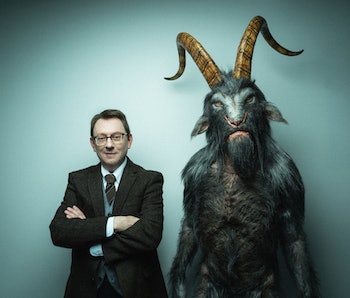 What is the nature of evil? This question lies at the dark heart of Evil, the popular CBS series from television duo Robert and Michelle King. While the show found only cult appeal during its first season in 2019, its arrival on Netflix in autumn 2020 made it far more popular and a sleeper hit during a most troublesome year.

But at just 13 episodes, Evil is an easy binge. One year after its premiere and in the midst of a never-ending pandemic, fans may be wondering: Where is Evil Season 2?

Here's everything we know so far about Evil Season 2. Bookmark this page and check back often as we'll update it with more information as they're released, including plot details, casting announcements, trailers, and more.

Warning: Spoilers for Evil Season 1 ahead.

When is the release date for Evil Season 2?

There is no premiere date for Evil Season 2. In a January 6 Instagram post, lead star Katja Herbers said the second season will premiere on CBS "this spring" in 2021.

Herbers similarly predicts that the second season will stream on Netflix "a while after that."

The second season of the series was filmed in 2020, during the Covid-19 pandemic. At New York Comic-Con held virtually in October 2020, the cast of Evil recorded lines from Season 2 episodes over Zoom, which were cut and edited into a "season trailer" that satirized the suspenseful editing of TV show trailers.

In August 2020, Inverse interviewed series regular Aasif Mandvi, who told us about the show's status at the time:

"It's not up to me, you'd be surprised to know ... There's a lot of conversations between the networks, unions, and New York state about safety. From what I've heard we'll start in the next few months. I hope sooner than later."

What is the story of Evil?

Evil is a horror procedural about a forensic psychologist and mother of four, Kristen (Katja Herbers) who teams up with a priest-in-training, David (Mike Colter, Luke Cage) to investigate supernatural incidents. Usually, it's demonic possession. Along for the ride is Ben (Aasif Mandvi), a tech expert and non-practicing Muslim who acts as a scientific filter.

Standing in their way is Michael Emerson (Lost, Arrow) as Dr. Leland Townsend, an expert in the occult with inexplicable ties to the underworld. Also a recurring presence in Evil is a creepy incubus named "George" who haunts Kristen's nightmares.

Arguably one of the most interesting things about Evil is its ever-shifting parameters of the supernatural. Just when you think science, fact, and objective truth has won the day, there's always something no one can explain. Conversely, science and truth are capable of revealing things that are even more monstrous than a demon.

What happened at the end of Evil Season 1?

Warning: Spoilers for Evil Season 1 ahead.

A recurring antagonist, Orson LeRoux (Darron Pettie), whom Kristen met in the pilot, returns in an attempt to patch things up. But Kristen doesn't buy it and deflects Orson's invasive attempts at an olive branch. Pushed to the brink, Kristen takes action.

Meanwhile, David and Ben uncover the final puzzle piece in a season-long mystery. A fertility clinic, RSM Fertility, becomes a possible front for a secret organization attempting to raise a generation of susceptible humans. To Kristen's horror, she learns that one of her children, Lexis, was born after she was treated at RSM.

Oh, did we mention David's visions? Also in the Season 1 finale, David sees a vision of Kristen walking towards Leland's master, in a cornfield with a scythe. The eerie image is full of metaphor, but no clear explanation.

"I think what we want to do is chew that next year," Robert King told Entertainment Weekly in a January 2020 interview about the vision. "Is that the Devil? Again, we don’t want to undercut the drama of the moment by saying it’s metaphor because it’s just not metaphor. It is real, but how much of it is a demon character influencing everybody’s mind and influencing everybody’s dream life, and how much is he real, I guess is what we’re saying."

What is the plot of Evil Season 2?

There are no known plot details for Evil Season 2. But one can safely assume the season will continue the cliffhanger of Season 1, and further reveal the vast conspiracy that ties RSM Fertility to Leland and to all the great evil that David, Kristen, and Ben have encountered.

Who is in the cast of Evil Season 2?

There are no known guest stars for Evil Season 2.

Kurt Fuller, who plays Kristen's therapist Dr. Boggs and has been dragged into a few cases, will also return. He told TV Guide he hopes to be more involved.

"They've already got a skeptic in Ben, but I do have some specialized talents that I can bring to them," Fuller said. "And I think that we'll see a little bit more of it next year, where I actually can keep them out of trouble a little bit, which is what I would love to do."

Where can I watch the trailer for Evil Season 2?

Kind of! At New York Comic-Con 2020, the cast of Evil read lines from episodes of Season 2 over Zoom. Their readings were amusingly cut and edited to mimic the tropes and aesthetics of a "real" TV series trailer, with stock footage to make up for the lack of filming done at the time.

You can watch the "trailer" for Evil Season 2 in the embed below.