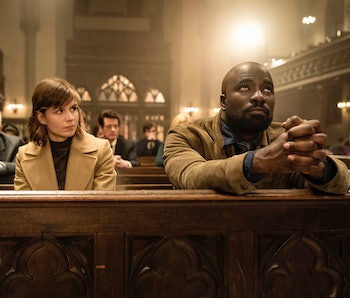 Evil is the supernatural procedural we didn’t know we needed. Production is set to resume later this fall and the new trailer previewed what fans can expect from Season 2 of the Netflix supernatural horror series. In one of the most unique promo trailers to hit the internet, Evil teases Season 2 with new and shocking details.

The Season 2 trailer debuted during Evil’s New York Comic Con panel on Saturday, October 10. It's a parody that riffs on the series’ tropes while weaving together some clues about its Season 2 storyline.

It may be one of the best trailers released in the era of COVID-19 and it underscores the power of creativity despite limited resources and an overall lack of footage. We’ve seen so many actors over Zoom since March — be it during live cast readings or interviews. However, the Evil trailer cleverly intercuts the cast reading dialogue from Season 2 over Zoom with stock footage, Kurt Fuller’s narration, and spooky sound effects provided by Aasif Mandvi. What could’ve been a boring promo transforms into something distinctly of our time, all while delivering on the suspenseful thrills that are characteristic of TV trailers.

Here are the trailer's biggest takeaways.

Kristen Bouchard has been corrupted by the devil

Season 1 left off on a cliffhanger that implied Kristen murdered Orson following the stalker’s attempts to let bygones be bygones (he had presumably seen the light). Meanwhile, David had a vision that she was walking toward Leland's master, a horned demonic figure holding a scythe. In the Season 2 trailer, Kristen tells Dr. Kurt Boggs that she came into “contact with an object” that gave her a skin rash.

Of course, she may be talking about the crucifix imprint that she received at the end of Season 1, but it could be something else entirely. Later on, Kristen tells someone to “go away,” indicating that the rash may be giving her hallucinations. It’s possible that Kristen is being corrupted or possessed in Season 2, a revelation exacerbated by the fact that David says he saw the devil hugging her in a vision.

Leland and Sheryl will break off their engagement

Leland and Sheryl are engaged in Season 1, but the Season 2 trailer quickly dismantles their upcoming nuptials. While Sheryl ponders whether they should have a groom cake at their wedding, Leland tells David that he needs an exorcism (which is an unusual wedding gift). Leland later reveals that he was only using Sheryl to hurt her daughter, Kristen.

Now that he’d accomplished as much, Leland sees no use in carrying on with the charade of picking wedding planners and DJs with Sheryl. Surely she’ll be devastated. Leland may have been plotting Kristen’s corruption all along and, now that he has her in the devil’s clutches, he can seemingly move on from this family. Whatever the case may be, the Evil trailer gave us enough to tide us over until the premiere of Season 2.