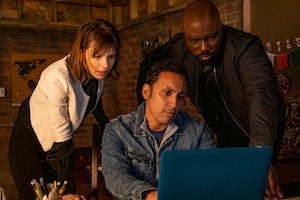 Evil premiered last year on CBS and quickly proved itself to be genuinely intelligent and scary, with clever writing, eerie supernatural touches, and thought-provoking meditations on the nature of evil itself. Evil’s recent debut on Netflix has made it even more popular among fans.

However, its 13-episode first season makes it an all-too-brief binge. With filming on Season 2 only just getting started, it may be a while before the show returns. To fill in the gap, we’ve compiled a list of eight scary good supernatural/horror series like Evil that are worth the watch.

Based on the comic book series by Beau Smith, Wynonna Earp follows the great-great-granddaughter of lawman Wyatt Earp as she sends demons, returning outlaws initially killed by Wyatt back to hell. The series borrows from both the supernatural and western genres to create something unique and ambitious.

Where to stream: Netflix, Syfy

The title gives this series away, but it’s all about investigating the supernatural. Sam and Dean Winchester are in the business of hunting monsters — demons, witches, shapeshifters, and vampires. In the early years of the show, all of these creatures were considered villains, but the show has since explored what it ultimately means to be evil.

One of Marvel’s final series developed under Jeph Loeb’s Marvel TV branch, Helstrom follows the sinister world of Daimon and Ana Helstrom — the estranged children of a demonic serial killer who have inherited supernatural abilities of their own. When dear old demon dad returns, they must reunite to defeat him, all while dealing with their own internal demons.

Where to stream: Hulu

Grimm takes a turn into supernatural territory when homicide detective Nick Burkhardt discovers he’s a Grimm — a guardian tasked with protecting Earth from a horde of mythical creatures. The series is a procedural that combines a bit of horror with dark fantasy elements to weave together its story.

Where to stream: Amazon Prime Video

This supernatural horror series is nothing like the ‘90s take on Sabrina, the Teenage Witch. Satan, the Eldritch terrors, and demons run amok in the world of Chilling Adventures of Sabrina. In one instance, Sabrina and her friends even find themselves in hell to stop the devil himself. By offering a dark twist on a beloved comics character, the series delves further into the world of witches.

Prodigal Son is less of a supernatural series and more of a crime drama. Like Evil, it shares in the themes of good and evil while delving into the nature of psychopaths through psychology. This is most potently explored with Malcolm Bright, a profiler for the FBI who wrestles with the possibility of becoming a serial killer like his father.

Where to stream: Hulu

Based on Thomas Harris’ Red Dragon novel and serving as a prequel series to Silence of the Lambs, Hannibal is a scary-good show. The series is focused on the titular forensic psychiatrist’s relationship with FBI investigator Will Graham. Its sharp storylines venture to some pretty sinister and terrifying places, expanding upon what we already know about Dr. Hannibal Lecter and his history.

This British series didn’t last very long before it was canceled, but it’s absolutely worth the binge. Crazyhead follows Amy, a bowling alley staff member who discovers she has the rare ability to see demons. When she’s saved by Raquel, a demon hunter, the pair join forces, resulting in plenty of supernatural and comedic adventures.

More like this
Entertainment
8.9.2022 1:00 PM
Has your favorite HBO Max show been canceled? The fate of 9 sci-fi series revealed
By Robin Bea
Culture
8.2.2022 9:00 AM
7 incredible sci-fi shows and movies coming to Netflix in August 2022
By Robin Bea
Entertainment
17 hours ago
Why Andor is bucking one of the most popular trends in Star Wars history
By Dais Johnston
Related Tags
Share: