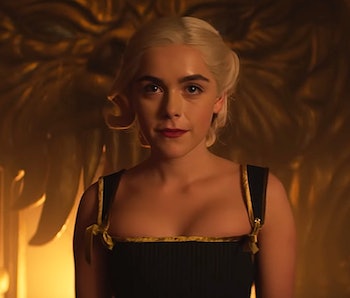 It's only been a few days since Season 3 of The Chilling Adventures of Sabrina came to Netflix, but we've spent all weekend binging the latest batch of episodes and are already hungry for more. The final episode of the bunch introduced an ancient and terrifying threat for Season 4. So what are the eldritch terrors and how might they factor into Sabrina going forward? Let’s break it down.

Spoilers ahead for Season 3 of Chilling Adventures of Sabrina.

After vowing to find him in the Chilling Adventures of Sabrina’s Season 2 finale, Prudence and Ambrose tracked Father Blackwood to Scotland in Season 3. It didn’t take them long to figure out that the warlock had spent 15 years there instead of one month in real time. Time works differently there, thanks to a mysterious creature Father Blackwood had found nestled inside an egg in the waters of Loch Ness.

Blackwood realized the untapped powers of this mysterious creature, which helped Sabrina create a time paradox in the finale, were much stronger than those of the Dark Lord or the old pagan gods. Strengthened by the Mark of Cain, Blackwood summoned the eldritch terrors and unleashed the elusive creature from its egg. In one fell swoop, Blackwood brought about the “end of all things” and “the beginning of the end.”

So what are these eldritch terrors? While Chilling Adventures of Sabrina doesn’t really explain exactly what they might entail beyond their world-ending capabilities, the word “eldritch” is a fancy term used to describe anything that is weird, sinister, or otherworldly. In TV, “eldritch abominations” may refer to famous supernatural creatures like H.P. Lovecraft’s Cthulhu and entities called the Great Old Ones.

It’s possible Father Blackwood, who’s hellbent on revenge against Sabrina Spellman and her family, will try to harness the egg creature and its powers for his own gain. However, Chilling Adventures of Sabrina has yet to reveal how these eldritch terrors will come into play in Season 4, or what form they’ll take.

The witches of Greendale – and the world – will have to work together to face their biggest and possibly most sinister threat yet.

The Chilling Adventures of Sabrina Season 3 is currently available to stream on Netflix.