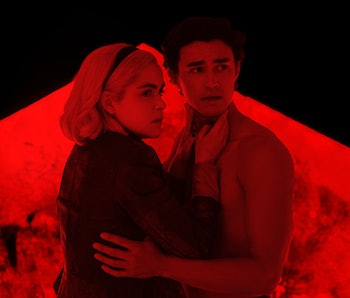 Chilling Adventures of Sabrina Season 2 ended with a major cliffhanger. With the Dark Lord back and revealed to be Sabrina’s father, the teenage witch and her companions tried to stop him from enslaving humanity. However, Nicholas Scratch, tasked with luring Sabrina to her father, decides to assuage his guilt by offering to bind himself to the Dark Lord for an eternity in Hell. Praise Satan! Or Lilith, the new Queen of Hell.

Season 3 consists of eight episodes and will include new characters and an even bigger threat to the Church of Night. But before diving into a whole new storyline, Chilling Adventures of Sabrina Season 3 needs to address the Season 2 storylines left incomplete.

3. Will the real Mrs. Wardwell remember what happened to her?

Before Lilith took her place as Queen of Hell, she restored Mrs. Wardwell. It seemed like an act of good will on Lilith's part, but the damage to the real Mrs. Wardwell's life was already done. The Baxter High teacher, who became principal when Lilith was pretending to be her, has a lot of catching up to do.

She missed a lot. The poor woman probably doesn't know that Lilith killed her fiancé Adam in Season 2, so there's no telling how it'll play out, or even if Mrs. Wardwell will be a big factor in Season 3.

2. Will Prudence and Ambrose track down Father Blackwood?

Father Blackwood caused a lot of turmoil last season. There was little to like about the vile warlock intent on keeping to the old ways. He ruled with an iron fist and took pleasure in doing so.

After poisoning everyone in the Church of Night and framing Ambrose for the Anti-Pope's murder in Season 2, Prudence swore to find him find him. Based on the Season 3 image above, it seems like Prudence might make good on that promise.

Prudence is in a very different outfit than her usual black dress from the Academy of the Unseen Arts, so it's possible her mission has already begun. She and Ambrose are nothing if not strong-willed, so Blackwood better watch his back.

1. Will Sabrina rescue Nick from Hell?

This is the biggest question of all. Nick made a huge sacrifice to save the coven from the Dark Lord’s rule, so when Season 2 ended with Sabrina pledging to “go to Hell and get my boyfriend back,” it sounded like Season 3 would be spent trying to figure out how to do that.

At best, Nick could be rescued by the Season 3 finale and at worst, not at all. It's hard to imagine that Sabrina would just leave Nick behind, so it's possible that she does go to Hell to save him in Season 3, even though he's still bound to the Dark Lord. Only time will tell if she's successful.