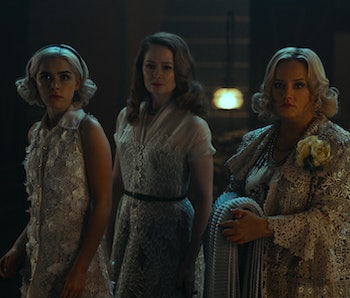 Though they air on different platforms, Netflix’s Chilling Adventures of Sabrina and The CW’s Riverdale belong in the same universe. While the showrunners haven't crafted overt links between the two shows, that hasn’t stopped Sabrina from dropping in a few Riverdale Easter eggs every now and then. However, Season 3’s third episode, “Heavy is the Crown,” may have made the biggest connection yet.

Warning! Spoilers ahead for Season 3 of Chilling Adventures of Sabrina.

Season 3 didn’t waste a second following through on its Season 2 cliffhanger. Sabrina explains it’s been a month since Lilith took up her new position as Queen of Hell and dragged the Dark Lord-possessed Nicholas Scratch with her. In Season 3, the teenage witch’s mission remains the same: save Nick from Hell.

Surprisingly, the entire endeavor took only one episode. Once Sabrina assumed her Queen of Hell duties, it was on to more important tasks, like defending her right to the throne against Prince Caliban. (He’s not her brother, he was made of clay and yes, it’s complicated.) The first of three tasks is finding King Herod’s legendary crown and bringing it to the infernal kings in Hell. That’s where Riverdale comes in.

Sabrina and Ambrose team up to find the crown, which is incredibly difficult to locate. With the use of an immoral compass, his waning magic, and history books, Ambrose manages to track King Herod’s crown to nearby Riverdale. It turns out that Private Benjamin Blossom rescued the crown from Hitler’s bunker in 1945 and smuggled it to his hometown of Riverdale.

Though he was later murdered by occultists, Blossom hid the crown in a tree, where Sabrina and Ambrose discover it. With that one name and a trip to town, Chilling Adventures of Sabrina took a major step forward in connecting the show to Riverdale.

If the name Blossom sounds familiar, that’s because it's Cheryl’s last name in Riverdale. Yes, that Cheryl. The famously rich and unruffled red head comes from a family with a sordid history of murder, a supposed curse, and a ton of drama. Cheryl’s father Cliff straight-up murdered her twin brother! It's no wonder Sabrina believes that "Riverdale's a big, scary place." The tree where the crown was hidden was likely a maple tree, symbolic of the Blossoms' maple syrup business.

While Riverdale is set in the present, however, Sabrina’s timeline is a bit unclear. The show has never confirmed the year in which it takes place. There’s no telling if Benjamin Blossom will ever be mentioned again, or if Riverdale will offer more backstory on his character. For now, it’s enough that Chilling Adventures of Sabrina finally tied the shows together in a concrete way.

Chilling Adventures of Sabrina is currently available to stream on Netflix.