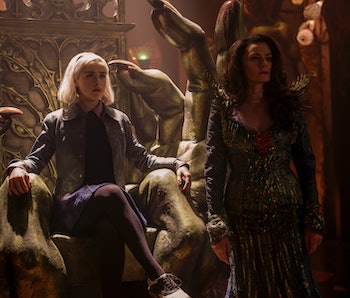 This article about Season 3 of the series Chilling Adventures of Sabrina was originally published on December 9, 2019 and updated on January 2, 2022 following the release of the season on Netflix. Read on for the original article, with some new changes to reflect the latest updates on this topic.

There’s no rest for the wicked in Greendale. Season 3 of Chilling Adventures of Sabrina leaned heavily into mythical lore as the witch’s coven fought against visiting pagans intent on bringing back the old gods to Earth. While Sabrina’s family spearheaded the fight against the pagans, Sabrina had other matters to attend to in the Infernal Realm. Namely, defending her place as Queen of Hell against Prince Caliban.

In its fourth and final season, Chilling Adventures of Sabrina was ready to take things to the next level following its trippy Season 3 finale, promising even more mythology-laden goodness and a new god to worship. Praise Hecate! With Father Blackwood still undefeated, the eldritch terrors on the horizon, and two Sabrina Spellmans existing at once, Season 4 had a lot of ground to cover.

Here’s everything to know about Season 4 of Netflix’s Chilling Adventures of Sabrina.

When was the release date for Chilling Adventures of Sabrina Season 4?

The Chilling Adventures of Sabrina showrunners confirmed that the series had been renewed through its fourth season in December 2018. The spooky series ended with a Christmas Eve premiere date: Thursday, December 31. The season consisted of eight one-hour episodes.

Is there a trailer for Chilling Adventures of Sabrina Season 4?

Yes, there is! Netflix dropped a two-minute trailer that included plenty of new footage from Season 4. The eldritch terrors are here, Nick is seemingly joining Baxter High, Sabrina will join her twin in potentially conjuring (or stopping) a threat, and Sabrina and Ambrose may or may not be astral projecting. Watch the trailer below!

What is the plot of Sabrina Season 4?

The Season 3 finale saw Father Blackwood align himself with the pagans, but he escaped unharmed, thanks to the Mark of Cain. Blackwood completed the ritual to summon the eldritch terrors, far more powerful than the Dark Lord, and he unleashed the mysterious creature nestled inside the egg he’d collected in Scotland. Understandably, Season 4 tackled the aftermath of Father Blackwood’s actions, with each of the starting episodes dealing with a different Eldritch Terror.

There’s also the fact that Sabrina created what Ambrose called a “time paradox” with her decision to rule as Queen of Hell and live a normal life in Greendale. The ramifications of such come to a head in Season 4, as Sabrina’s attempt to live a double life causes issues across space and time.

Who was in the Sabrina Season 4 cast?

Since Abigail Cowen’s Dorcas died in Season 3, she was downgraded to a guest role for the final season. And though Sam Corlett’s Prince Caliban was turned to stone and trapped in the ninth circle of Hell, he managed to escape and even attempted to marry Sabrina Morningstar.

Were there more musical numbers in Sabrina Season 4?

“It’s been so fun and so pop and so youthful. We had that music video that Netflix released and people loved it. I loved it! At the risk of spoiling part 4, we have an epic battle of the bands episode [coming], which I love.”

Why was Chilling Adventures of Sabrina canceled?

In July 2020, months before the final season premiered, Netflix announced that it would be canceling Chilling Adventures of Sabrina. The streaming service cited the COVID-19 pandemic, which caused them to shutter production on several shows.

Will Sabrina have any crossover with Riverdale?

For those who are missing their dose of Sabrina after Chilling Adventures concluded, fear not! In July 2021, it was announced that a prospective third season (slash fifth part) of the story was planned for a comic series titled The Occult World of Sabrina. Additionally, Kiernan Shipka is planning to reprise the character during Riverdale’s sixth season.

Chilling Adventures of Sabrina is available on Netflix.

This article was originally published on Jan. 24, 2020