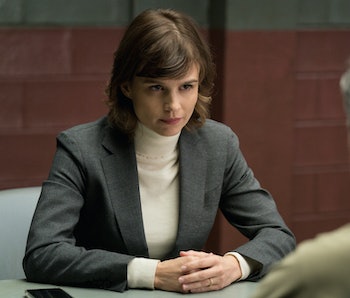 Evil Season 2 has officially begun filming. The supernatural series debuted a unique Season 2 trailer at New York Comic Con that hinted at a couple of upcoming storylines. At the time of its release, it was still unclear when the cast would resume filming in New York City, with the production start date delayed due to the ongoing pandemic. However, series star Katja Herbers recently confirmed that production on Evil Season 2 was up and running, and she may have dropped a major clue about Kristen to go along with it.

Evil has become a cult hit since it arrived on Netflix, placing in the “Top 10” of the streamer’s most watched list for a while. In September, Evil was one of the few CBS shows on standby, but the wait is now over.

Herbers posted an image to her Instagram story (via Reddit) of the rainy NYC skyline, writing “And so it begins.. Season 2 #Evil.” On the table in front of her was a script and a brown, worn-looking psychiatric glossary with an alphabetic cover. Check it out below!

Of course, the inclusion of the psychiatric glossary may simply mean that it's something Herbers uses on-set. After all, Kristen Bouchard is a forensic psychologist and she may be looking up some of the words from the show's script. The glossary itself is a psychological book that covers the most common psychiatric terms. It's typically listed in alphabetical order, hence the letters decorating the glossary's cover.

Looking at it from a different angle, however, this may be Herbers' way of teasing Kristen’s turn to the dark side. At the end of Season 1, the series implies that Kristen murdered Orson, a convicted killer who claimed he was possessed at the time of his crimes. She is also marked by a crucifix burn — which has indicated demonic possession on Evil.

The book in the photo looks old and it’s possible that it’s being used as a prop in the show. Perhaps Kristen becomes so terrified by the burn mark and the escalating night terrors and attempts to find a psychological cause for it instead of accepting that she may be possessed.

In the Season 2 trailer, Kristen goes to see her therapist and there are inklings that the terrors are getting worse. She could be looking up glossary terms like affect allusion — a misperception attributed to changing moods where Kristen, as an example, may have seen something wicked at night despite there not being anything there later. Either way, the glossary seems old enough that Kristen may have pulled it out for comfort and as a signal for her changing mental state.

While Evil has started production on its second season, CBS has not yet scheduled a premiere date. For now, we can only speculate on the small tidbits we’re given by the cast while we wait for what's next.