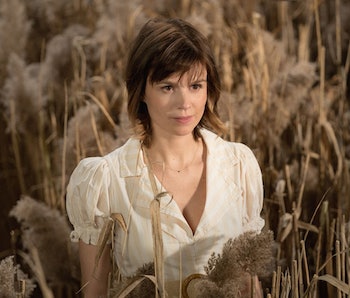 Evil set up a conundrum for Kristen Bouchard. The forensic psychologist is no stranger to the supernatural, investigating possessions and the occult with David and Ben throughout Season 1. But, sometimes the evil gets a bit too close for comfort and an intriguing new fan theory suggests that there’s more to Kristen’s crucifix burn than meets the eye. That could have major ramifications in Season 2.

In the Season 1 finale, David has a vision of Kristen walking toward a demonic figure with horns. After a run-in with the killer Orson LeRoux, Kristen’s hand is burned by a crucifix — from what we've seen in the show so far, this typically indicates a demonic possession. While she isn’t a firm believer in the supernatural, there’s a good chance that Kristen will be struggling with some sort of possession in the episodes ahead. The Season 2 trailer also seems to hint as much. However, one theory offers a different take that alters everything we thought we knew about the character.

Reddit user Miamixink3 argues Kristen has been possessed all along — that’s the reason for her terrifying dreams. The theorist also surmises that Dr. Leland Townsend, a fellow psychologist and occult expert, hates Kristen because he knows she’s been possessed this whole time. Perhaps the evil things that she’s been seeing have all been a sign that fans have previously overlooked. After all, the burn mark left by the crucifix was a huge indicator that Kristen is now possessed. This theory simply pushes back the timeline for when it happened.

Kristen learns that RSM Fertility, the clinic she and her husband used to conceive their daughter Lexis, was actually run by a secret organization connected to all of the supernatural cases in Season 1. In short, if Kristen was treated by the RSM Fertility, it could mean that she’s been possessed for far longer than we initially thought and that it didn’t just happen in the finale.

In Evil’s Season 2 trailer, Leland breaks off his engagement with Sheryl, Kristen’s mother. He reveals that the reason he was with her was to hurt her daughter. It’s possible that Leland already knows that Kristen is possessed and is trying to get close enough to encourage her to fully give into the evil inside her. After all, Leland is a dangerous antagonist and he loves nothing more than to push others to do bad deeds. As a servant of the horned demon, it may be an incentive to have Kristen on Leland’s side.

The Inverse Analysis — Evil Season 1 had plenty of twists and turns. Nothing is ever as it seems on this show. This theorist could be onto something with Kristen. We know that she’s been dreaming up some terrifying things. In addition, David confirmed he saw the devil hugging her in a vision (which will presumably take place in Season 2). It would be a shock if Kristen succumbed to possession long before the audience met her, but the potential revelation would certainly make Season 2 all the more interesting.