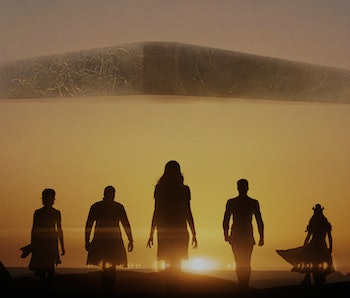 Every Marvel show and movie released since Avengers: Endgame has dealt directly with the events of that movie, and it looks like Eternals will be no different. The first official trailer for the film reveals exactly how it connects to Endgame.

Eternals follows a band of superheroes who have existed on Earth for thousands of years, subtly influencing human history without directly interfering. We know the movie will dive into the history of the Marvel Cinematic Universe like no film before it, but if you were worried Eternals was set entirely in the MCU’s past, you can put those fears to rest.

At the very end of the Eternals trailer, we see the heroes sitting around a table sharing a meal. One of them asks, “Now that Captain Rogers and Iron Man are both gone, who do you think is going to lead the Avengers?” Richard Madden (who plays Eternals leader Ikaris) replies, “I could lead them.” After a beat, everyone at the table erupts in laughter.

We don’t get enough detail in this trailer to really understand why that’s so funny. Is Ikaris incompetent? Or is it simply against the Eternals code to step in and lead a high-profile superhero team like the Avengers? To be honest, the trailer doesn’t reveal much (we don’t even see the godlike Celestials or the villainous Deviants, who both play a major role in Eternals lore). However, it’s interesting that Marvel decided it was worth clarifying the film’s relation to Endgame so early on.

"Marvel Studios' The Eternals features an exciting new team of superheroes in the Marvel Cinematic Universe, ancient aliens who have been living on Earth in secret for thousands of years. Following the events of Avengers: Endgame, an unexpected tragedy forces them out of the shadows to reunite against mankind's most ancient enemy, The Deviants."

However, this trailer makes those connections a little stronger. It’s clear that the Eternals are well aware of the events of Endgame and know the Avengers are in need of a leader. (It’s unclear if this movie takes place after The Falcon and the Winter Soldier or will acknowledge Sam Wilson’s new role as Captain America.)

This also makes sense considering Thanos was also an Eternal and is expected to appear in this movie via a flashback. So it tracks that the Eternals would have been following his actions, even if it went against their code to interfere. Either way, it will be interesting to get a fresh perspective on the events of Endgame and Thanos in particular when Eternals finally arrives later this year.