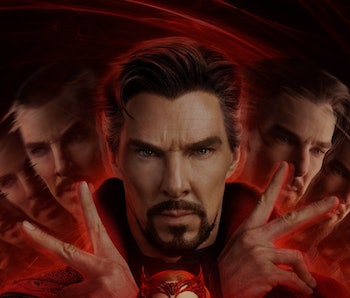 Stephen Strange has met his match — and it’s not just his evil variant from another dimension. Ahead of Doctor Strange in the Multiverse of Madness, Marvel is rolling out an endless series of teasers and trailers remixing and recycling the same few minutes of spoiler-free footage. However, the latest trailer may have just confirmed one mind-blowing fan theory about Doctor Strange 2.

Warning! Possible spoilers ahead for Doctor Strange in the Multiverse of Madness.

Doctor Strange and the Illuminati

A new teaser trailer for Doctor Strange 2 shared on the franchise’s official Twitter channel mostly features footage we’ve already seen, but near the end of the short clip, Mordo (Chiwetel Ejiofor) says the one word fans have been waiting to hear for months: “Illuminati.”

Ever since Marvel debuted its Super Bowl commercial for Doctor Strange 2, it’s pretty much been an open secret that the movie would introduce the Illuminati to the Marvel Cinematic Universe. But until now, it hasn’t been confirmed.

Now that we know for a fact Doctor Strange is meeting the Illuminati, it also pretty much guarantees the arrival of Professor X (a long-time member of the secret society in Marvel comics). It could also confirm a whole mess of other theories about the plot of Doctor Strange 2 — and what the Illuminati have been up to in the MCU all along.

The Illuminati and the MCU

In the Marvel Comics, the Illuminati is a secret society made-up of the world’s most powerful beings. The group includes:

Of course, we expect the MCU version to change things slightly. Iron Man is famously dead (though some fans still think we may get an alternate reality version of Stark played by Tom Cruise). We’re also expecting Captain Carter (Peggy with the Super Soldier Serum from What If...?) and possibly even Mordo to be members of this new Illuminati lineup.

More important than its members, however, is what the Illuminati has been up to. If they exist in Doctor Strange 2, it’s likely they’ve been operating behind the scenes for a while already, pulling strings throughout some of the MCU’s biggest moments.

One popular theory even argues the Illuminati engineered a House of M-style moment by removing Mutants (or the memory of Mutants) from the MCU. If that’s true (a huge if but stay with me), then Doctor Strange 2 could retroactively reveal that iconic Marvel characters like Wolverine have been around all along, fighting alongside the Avengers in New York, Sokovia, and Wakanda.