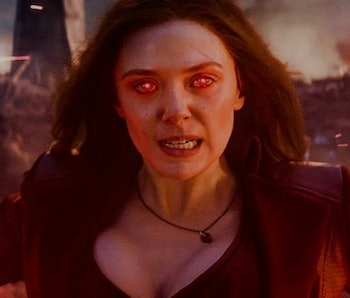 g Ever since Wanda Maximoff first joined the Marvel Cinematic Universe in Avengers: Age of Ultron, comic book fans have wondered when her most famous plotline would get the live-action treatment. WandaVision felt like the perfect opportunity to see House of M play out, but maybe the reason we haven’t seen it yet is because it actually already happened in the MCU.

A bold new theory inspired by the Doctor Strange in the Multiverse of Madness trailer could reveal that House of M already happened and the MCU we know and love is actually an incomplete reality where mutants were quietly wiped out. The weirdest part is, it all makes a ton of sense. Let’s dive in...

Warning! Speculative spoilers ahead for Doctor Strange in the Multiverse of Madness.

What is House of M in Marvel?

If you need a quick refresher, House of M was a comic published in 2005 focused on Wanda Maximoff along with the X-Men and the Avengers. In the comic, she discovers that her kids Billy and Tommy were taken from her similar to what happens in WandaVision. Worse, it turns out her memories were purposefully warped and that Professor X had been manipulating her powers.

This discovery — along with a bunch of other traumatic stuff — leads to Wanda creating an alternate reality called and ultimately robbing most mutants of their powers when she speaks the words, “No more mutants.”

That’s an extremely simplified version of the comic book story by writer Brian Michael Bendis. It’s worth reading the entire thing yourself, but for now, that will have to do.

Doctor Strange 2 and House of M

So why does this matter? Well, in an epic breakdown of the Multiverse of Madness trailer, YouTube channel New Rockstars offers a compelling argument that House of M already happened in the MCU.

The basic argument here is that Doctor Strange 2 seems to be recreating the plot of House of M. We’ve got Wanda searching for her kids and the arrival of Professor X; two crucial pieces of this story. Perhaps most notable, when the trailer zooms in on Wanda’s eyes we see a vision of two jail cells. Could Professor X and his Illuminati be holding Billy and Tommy in a multiversal jail beyond Wanda’s reach?

But if we assume Wanda is heading down a House of M path, there’s one big problem: there aren’t any mutants in the MCU. At least not yet. And while it appears Professor X is confirmed for Multiverse of Madness, the rest of the X-Men probably won’t fit into this jam-packed movie.

But what if that’s because X-Men were already removed from the MCU and Wanda is going to bring them back? It might sound like madness, but one major detail from the Doctor Strange 2 trailer has us convinced.

No more mutants in the MCU

When Doctor Strange gets arrested in the trailer, we hear someone speak the following words as the Illuminati discusses his fate: “We should tell him the truth.”

Now, that could mean a lot of different things, but New Rockstars argues this is Professor X preparing to reveal the biggest secret in MCU history. What if the story we’re been watching play out for over 20 movies isn’t actually the main story? What if it’s all just a pocket-dimension created when someone used magic to remove mutants from the world?

It’s a far-out theory, but Multiverse of Madness looks to be a far-out movie. And besides, Marvel is going to have to pull some impressive tricks to bring mutants into the MCU, so why not just announce that everything we’ve seen so far wasn’t even real at all?

Doctor Strange in the Multiverse of Madness releases on May 6.