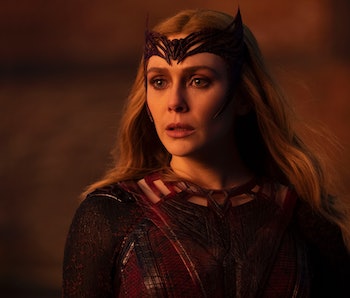 In recent years, Doctor Stephen Strange (Benedict Cumberbatch) has emerged as one of the most compelling and capable heroes in the Marvel Cinematic Universe. It’s partly for that reason that his long-awaited second standalone film — this year’s Doctor Strange in the Multiverse of Madness — is so highly-anticipated among Marvel fans.

However, despite his status as one of the figureheads of the MCU, Doctor Strange will have to share the Multiverse of Madness spotlight with Wanda Maximoff (Elizabeth Olsen). The new film promises to pick up where last year’s WandaVision left off, and according to a new MCU leak that means Multiverse of Madness will split its focus between Olsen’s Scarlet Witch and Cumberbatch’s Strange.

A Tale of Two Heroes — Marvel insider DanielRPK recently tweeted that they’ve heard Doctor Strange in the Multiverse of Madness is “as much about Wanda as it is about Strange.” In a follow-up tweet, the leaker added that they’ve heard Wanda has “​​almost as much screentime” as Strange does.

These tweets may come as a surprise considering the supporting presence that Wanda has had in many of the early trailers and TV spots for Multiverse of Madness. However, for most Marvel fans, these tweets likely just confirm something that they’ve suspected ever since the WandaVision Season 1 finale premiered on Disney+ last year.

Picking Up the Pieces — WandaVision leaves Wanda Maximoff in a bad place. The series’ post-credits scene not only reveals that Wanda is still grieving from the loss of her family, but is also looking to an evil book known as the Darkhold for answers. Combined, the scene suggests that Marvel is taking Wanda’s story into some dark places moving forward.

However, the studio has also kept Wanda’s role in Multiverse of Madness shrouded in mystery. Certain scenes from the movie’s trailers and TV spots have suggested she’ll be an ally to Stephen Strange, while others have hinted that she may be behind some of the chaos in the film. As a result, it’s still unclear exactly what kind of role she serves.

This leak, unfortunately, doesn’t tell us much more about the actual nature of Wanda’s part in Multiverse of Madness. It does, however, confirm that she’ll have a far bigger presence in the film than its trailers and TV spots have hinted.

The Inverse Analysis — Most Marvel fans seem to believe that Wanda Maximoff is the main villain in Multiverse of Madness, but its director, Sam Raimi, has suggested that may not be the case.

In a recent interview with Fandango, Raimi was asked whether he considers Wanda, Baron Mordo (Chiwetel Ejiofor), or Sinister Strange to be the film’s main villain. In response, Raimi said, “I would say, at different times, all of the above.” So Wanda’s role in Multiverse of Madness may not end up being as straightforwardly heroic or villainous as some fans think.

All Marvel fans can do right now is be content with knowing that Doctor Strange in the Multiverse of Madness won’t just check in with Wanda Maximoff, but will actually serve as the next chapter in her story. What remains to be seen is which direction that story takes her.

More like this
Entertainment
Feb. 6, 2023
Ant-Man's Memoir Is Real and Hints at Dark Quantumania Ending
By Eric Francisco
Entertainment
Jan. 26, 2023
Corey Stoll could have the chops to make a live-action M.O.D.O.K. work
By Mónica Marie Zorrilla
Entertainment
Jan. 25, 2023
The MCU could bring back a hero from its most underrated TV show
By Dais Johnston
LEARN SOMETHING NEW EVERY DAY.
Related Tags
Share: