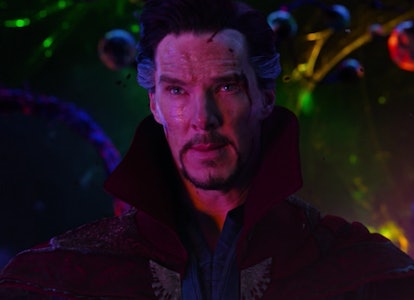 Doctor Strange 2 could be even wilder than we thought. The upcoming sequel (officially titled Doctor Strange in the Multiverse of Madness) is shaping up to be one of the most exciting and promising movies in Marvel’s Phase Four lineup, with Elizabeth Olsen’s Wanda Maximoff starring in a lead role in the film opposite Benedict Cumberbatch’s Stephen Strange.

The sequel is directed by Evil Dead and Spider-Man filmmaker Sam Raimi and is said to be the closest thing to a horror film the Marvel Cinematic Universe has made up to this point. And it looks like Multiverse of Madness may even feature an appearance from one of Marvel’s most horrifying heroes.

But in bringing one more iconic character into Marvel movies, the studio might be erasing a key moment from another MCU installment: Agents of S.H.I.E.L.D.

The News — That Hashtag Show reports that Doctor Strange in the Multiverse of Madness will feature a surprise cameo from none other than Ghost Rider.

While Marvel has the rights to make a Ghost Rider solo film, the report states that the studio is more interested in having the character take on recurring side roles in upcoming MCU films (similar to The Hulk’s appearances across the Avengers movies and Thor: Ragnarok). His cameo in Multiverse of Madness could reportedly be the first of those appearances.

Of course, this won’t be the first time Ghost Rider appears in the MCU. The character was played by Gabriel Luna in Agents of S.H.I.E.L.D. (there’s also the non-canon Nicolas Cage movies, but let’s not talk about those). However, when Inverse reached out to the report's author to ask which Ghost Rider would appear in the Doctor Strange sequel, they replied bluntly: “It's a recast.”

Hell Hath No Fury — This news may feel like yet another blow for Agents of S.H.I.E.L.D. fans who were fond of Gabriel Luna’s Ghost Rider. However, it is worth mentioning that this report does say it will be the Johnny Blaze iteration of Ghost Rider appearing in the Doctor Strange sequel. Since Luna played the Robbie Reyes version of Ghost Rider on Agents of S.H.I.E.L.D., that still leaves open the possibility for him to reprise the role at some point in the future.

Then again, given how much Marvel has done to distance itself from Agents of S.H.I.E.L.D. in recent months, the chances of fans ever seeing Luna’s Ghost Rider again seem undeniably slim.

Outside of what this news could mean for Agents of S.H.I.E.L.D.’s future in the MCU, the possibility of Ghost Rider showing up in Multiverse of Madness is an interesting one. Not only would the existence of Ghost Rider in the MCU’s prime reality open it up to go even darker than it ever has before, but the character would also fit right in with the film’s promised horror elements.

Of course, there’s no telling what kind of role Johnny Blaze may play in the film’s story or what the narrative context is surrounding his appearance in it. Since his role is said to be little more than a cameo, it’s possible he could simply be one of the beings that Cumberbatch’s Strange runs into while traversing through the multiverse, or he could serve an actual function in the film’s narrative. At this point, either option seems possible.

The Inverse Analysis — Since this is an unconfirmed report, it’s always worth mentioning that it should be taken with a bit of a grain of salt. But assuming there’s truth to the claim, then it means Marvel is including Ghost Rider in its ongoing MCU plans.

That’s both exciting and unexpected, especially considering the studio is already set to bring characters like Kang the Conqueror, Kate Bishop, Ms. Marvel, Miss America, Stature, Shang-Chi, Moon Knight, the Eternals, She-Hulk, and the Fantastic Four into the fold in the very near future. To say the MCU is about to get considerably more populated would be an understatement.

Doctor Strange in the Multiverse of Madness will be released in theaters on March 25, 2022.