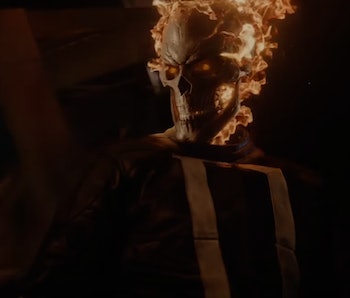 The Marvel Cinematic Universe debuted Ghost Rider in this season of Agents of S.H.I.E.L.D., and he is without a doubt one of the coolest looking characters to ever appear on the show. A new featurette from Marvel goes behind the scenes with Visual Effects Supervisor Mark Kolpack and breaks down the design elements that went into creating a new look for the classic Marvel anti-hero.

Despite having several incarnations within the comics, Ghost Rider’s general look has always kept to the same motifs: fire and skulls. It turns out, however, that the visual effects team on Agents of S.H.I.E.L.D. went above and beyond to depict Ghost Rider within the show. As VFX supervisor, Kolpack was used to going through S.H.I.E.L.D. scripts and pinpointing areas that would require his team’s VFX skills to then execute those visual needs. However, Kolpack reveals in the two-minute video that even he was caught off guard when told that the show would be tackling Ghost Rider.

The video highlights some interesting details that went into creating Ghost Rider’s flaming visage for television. During filming, actor Gabriel Luna, who plays Robbie Reyes, aka Ghost Rider, wears a makeshift hood adorned with LED lights during his scenes as the demonic character. These lights adjust to different color temperatures, allowing yellow hues to better correspond with lighting of actual fire.

In addition, Luna wears tracking markers on his face so that the animators can better capture his emotions and apply his expressions to the finished special effect. This emotional tracking is best seen when Reyes’s eyes light up with fire and animators take special care to match the expression with the movement of the flames.

The coolest detail, however, is when Kolpack revealed some interesting design flourishes, like the fact that Ghost Rider’s skull features a few vents that act similar to a car’s exhaust pipe. This detail, which incorporates the character’s passion for automobiles, really demonstrates the team’s commitment to creating a Ghost Rider never before seen by fans. This is because Kolpack and the team really wanted to create a unique Ghost Rider that audiences could connect with.