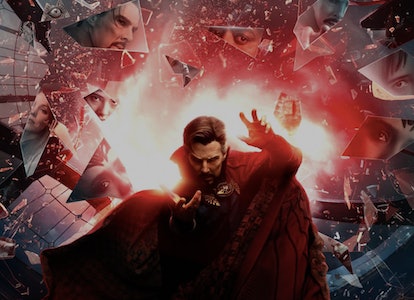 It was only a matter of time. The Marvel Cinematic Universe has been skidding into the multiverse for years, and Doctor Strange in the Multiverse of Madness is set to drive straight off that cliff. In the process, it looks like the next MCU movie could also create a direct connection between the mainline movies and one of the weirdest peripheral stories in recent memory.

Spoilers ahead for Doctor Strange in the Multiverse of Madness.

What happened — After Marvel released a new trailer and poster for Doctor Strange 2 seemingly hinting at the arrival of What If’s Captain Carter (an alternate reality version of Haley Atwell’s Peggy Carter who takes the Super Soldier Serum intended for Captain America), the official Disney+ Twitter account for Italy appeared to confirm the rumors.

“It seems that shield has recently reappeared somewhere ... 🤔 doesn't that sound like ‘Madness’ to you #CaptainCarter and all the episodes of #WhatIf are waiting for you on #DisneyPlus!”

For this to make sense, you need to know that a sliver of Carter’s vibranium shield (a version of Captain America’s with the U.K. flag replacing the stars and stripes) was spotted in the Multiverse of Madness poster. In that context, this Disney account seems to be confirming it’s more than just an Easter egg. Instead, it’s a major part of the plot, and that means you might be confused by Doctor Strange 2 if you haven’t seen What If (or at least a couple of key episodes).

Why this matters — Despite Marvel continuously saying that What If was part of the MCU, the animated anthology always felt superfluous to the main story. After all, it’s fun to imagine what might happen if Killmonger met Tony Stark, but does that matter to the plot of the movies?)

However, the arrival of Captain Carter in Doctor Strange 2 proves that What If really does matter, and opens the door to even more crossovers. Maybe that Killmonger variant will show up in Black Panther 2! Thanks to Multiverse of Madness, anything seems possible.

The Inverse analysis — Before we get too excited, it’s worth noting that Captain Carter still isn’t technically confirmed for Doctor Strange 2. This could just be the work of an Easter egg and an overeager social media manager. Then again, considering some of the other cameos we’re currently expecting (Patrick Stewart as Professor X? Tom Cruise as Iron Man?) Captain Carter seems like a pretty sure bet.

Doctor Strange in the Multiverse of Madness releases May 6, 2022.