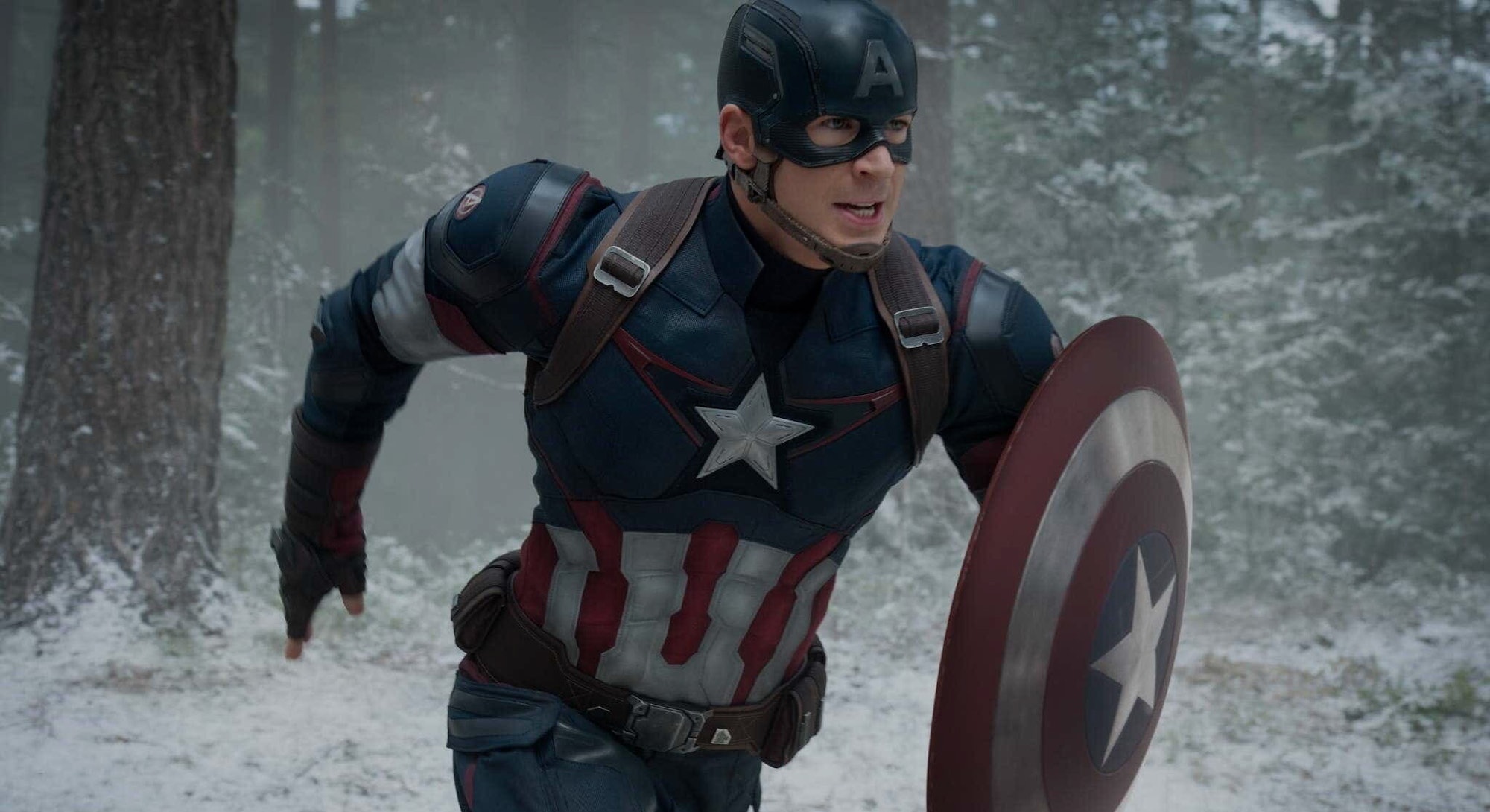 If you’ve spent much time in the Marvel fandom, you’ve likely come across some depiction of a bisexual Captain America.

On sites like Archive of Our Own and Tumblr, searching for stories about a bisexual Steve Rogers pulls up thousands of posts pairing Captain America with other Marvel characters like Bucky Barnes, Sam Wilson, and Tony Stark. There are over 100,000 such works on AO3 alone.

This reading of Steve Rogers as bisexual is not limited to the Marvel Cinematic Universe, though it has grown in popularity due to the films. That Captain America is coded as bisexual in fandom may seem unremarkable, but his defining character trait lends weight to this queer* reimagining.

A man of both the past and the present simultaneously, Rogers — when viewed as bisexual — allows us to rethink what we know about both the Marvel universe and queer history in general.

Marvel comics have seen a groundswell in queer representation within the last decade, from America Chavez, Hulkling, and Wiccan to Iceman and the Dora Milaje warriors Aneka and Ayo. Just this year, as part of Captain America’s 80th-anniversary celebration, the five-issue series The United States of Captain America introduced Aaron Fischer. This queer runaway assumed the mantle of Captain America to protect other queer teens who lacked stable housing.

And yet, the MCU has repeatedly passed up opportunities to feature explicitly LGBTQIA+ characters in its films. In 2021, in his self-titled Disney+ series, Loki became the first main character confirmed as bisexual and genderfluid — 13 years after Iron Man was released in theaters. While there is much to admire and enjoy in Loki, the series ultimately characterizes Loki’s romance with variant Sylvie as a “sick twisted romantic relationship” that is “pure chaos” and "could break reality.”

These descriptions resonate uncomfortably with queer history. In A Queer History of the United States, Michael Bronski explains how the discipline of sexology in the 1880s led to “the scientific discovery of ‘homosexuality,’” creating the opportunity for “open discussion about the subject.” Unfortunately, Bronski continues, this new language “immediately led to a clear articulation of negative stereotypes about homosexuals. For the first time in U.S. history, same-sex-desiring people could now feel diseased.”

Later, the American military tried to block gay men and women from enlisting during World War II by classifying queerness as a psychiatric disorder. Allan Bérubé explains in Coming Out Under Fire: The History of Gay Men and Women in World War II that “the reason for excluding [gay men] as psychopaths was that… they were considered to be irresponsible troublemakers who were unable to control their desires or learn from their mistakes and thus threatened other men.” Or, as Bronski puts it, “A direct link was being made between homosexual behavior and a threat to national security.”

This history is not entirely in the past, either. Don’t Ask, Don’t Tell was only fully repealed in 2011, and bans on openly transgender military personnel were lifted earlier this year. Only six U.S. states require that queer history feature in public school curriculums, while several other states ban these topics. As a queer person, it’s challenging to locate yourself in pop culture, history, and the present moment when it all seems hostile to who you are.

The importance of fanworks

Fanworks are a way for fans to write themselves into a narrative that would otherwise exclude them.

They’re essential for queer fans, who can reimagine a favorite character as queer and create the representation they want to see in the world.

Casey Fiesler, an assistant professor in information science at the University of Colorado Boulder, researches fan communities and their significance within popular culture. Their Medium-published essay “Bring on the Queer Killer Bees: How Marvel Completely Misses the Value of Fanfiction” discusses the twin objectives of creativity and inclusivity in this kind of work. Writing yourself into a narrative isn’t surprising, Fiesler writes, “when there is such little representation in pre-existing narratives. Fanfiction can be a way of amplifying marginalized voices.”

In some cases, fanon (fan-accepted or fan-created canon) can become so popular it is considered canon. Scooby-Doo’s Velma Dinkley, for example, is widely acknowledged to be queer.

Steve Rogers is a compelling metaphor for what it’s like to experience attraction to two or more genders. Many superheroes grapple with dual identities, but Captain America faces an additional challenge. A man out of time, Rogers’ inherent duality isn’t immediately visible, and readers and characters alike can forget that existing entirely in the 21st century means leaving behind much of what had tied him to the 1940s.

There is no clear way to be both men in a world where the lines between past and present are so clearly delineated. The Marvel movie events that affect Rogers most deeply are those where his past and present collide. For most of the films, Cap refuses to bury his past in favor of his present, rejecting broader societal pressures and expectations to follow his sense of what is morally right. In this, the larger world threatens to erase what he knows to be true.

Like the precarious balance of past/present, many bisexual people face erasure of their sexuality. Heteronormativity remains the assumed default, meaning someone bisexual must come out multiple times, sometimes to the same people. Bisexuals in relationships that appear heteronormative or straight from the outside sometimes have to defend their queerness. There is no clear way to signal bisexuality, mainly when monogamous relationships are also the expectation. In his own in-between space of past/present, it makes sense that Steve would resonate particularly strongly with queer viewers who have experienced erasure of their sexuality or even gender identity.

What seems to underline Captain America’s fanon bisexuality further is the presence of his adjustment to the 21st century as a popular topic for fanworks. Fanfiction examines Rogers navigating new social mores and catching up on decades of history and technological developments. The MCU films allude to the same (see Steve’s notebook in Captain America: The Winter Soldier or his quip that “It seems to run on some kind of electricity” in Avengers). On the surface, these fanworks may seem like any other.

Still, Rogers, a living artifact of the early half of the 20th century, has far more resonance across fandom and knowledge of queer history when coded as bisexual.

In the preface to Coming Out Under Fire, Bérubé reflects on what impact his research and writing had on him:

Begun as the story of how gay Americans had served their country, this book evolved into a history of how the military’s mobilization for war made soldiers confront homosexuality in their personal lives and changed the ways that homosexuality fit into American institutions. I realized that the nature of my subject was pulling me from the margins of minority history into the mainstream of American history.

In many ways, fanworks operate similarly to what Bérubé realized about his work on Coming Out Under Fire. By reimagining Steve as bisexual, fan creators are pulling everyday queer people from the margins of minority history into mainstream American history. They are normalizing the presence of queer people in history. Many fan creators research the places or periods they’re writing about, incorporating information such as the military bans of queer soldiers or creating visual artifacts like ration cards. Often, these stories allude to real people in history that readers may not know were queer.

This is not to suggest that all fanworks are rigorously researched or even should be. Instead, the push for fan creators and readers to reconsider what they know about the normalization of queer people in history is where fanworks are their most potent. Let's consider how fanworks in their most inclusive, intellectually curious form can push the boundaries of a canon. This fan practice can expand outward, allowing for greater advocacy of other marginalized identities that have been mostly ignored by mainstream pop culture.

New York Times bestselling author Tracy Deonn discusses what she calls “narrative extraction,” or “the work of finding, creating, and translating identification—and meaning—when one is not represented” in her article on the Twitter hashtag #BlackPantherSoLIT. Black fans practice narrative extraction by “claiming cartoon characters as Black….find[ing] a way to pull the narrative closer to themselves by assigning Blackness where it fits.” Deonn includes Sarah Hagi’s Vice article “All Your Favorite Cartoon Characters Are Black,” which argues that popular characters from Bugs Bunny to Arthur to Optimus Prime are inherently Black.

Not only are fanworks uncovering and normalizing the presence of queer people in history, but they’re also coding a character who is an immovable part of American history and pop culture as queer. Yet, this rewriting is not limited to pushing for more complex queer representation. Fanworks can also push for more complex stories for other identities that experience marginalization, such as BIPOC characters and the intersectionality of lived experiences. Rewriting Steve Rogers as bisexual firmly states queer people are American history and opens the door to advocate for more.

*A note on terminology: LGBTQIA2S+ terminology has expanded significantly over several years, with queer becoming a famous description to encompass all identities within one acronym. Queer is not always used by older generations, as it was once a pejorative term. Part of its popularity is how fluid the term is, depending on who uses it. Bisexual (sometimes written bisexual+) and pansexual can overlap in usage. Some bisexual and/or pansexual people use the terms interchangeably, while others use only one. I use bisexual to mean romantic and/or sexual attraction to my own gender identity and other gender identities.