“Not a perfect soldier, but a good man.” 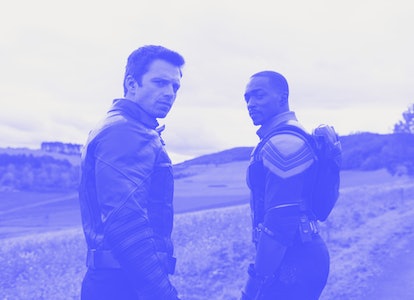 Legacy manifests itself in physical, symbolic, and psychological ways — a notion that’s become impossible to ignore in Falcon and the Winter Soldier.

The Marvel series sees Sam Wilson (Anthony Mackie) and Bucky Barnes (Sebastian Stan), along with the military, initially believing that Captain America’s legacy is his suit and shield. In order for the legacy to live on, they simply have to find a soldier to fill it.

In doing that, they all make the same mistake Tommy Lee Jones’ Colonel Phillips made in Captain America: The First Avenger — minimizing Captain America as a performance, a soldier on a stage in a costume.

Captain America is much more than that. His legacy isn’t the uniform. It’s not the shield. It’s the people — Steve Rogers, sure, but more to the point, Sam and Bucky.

Sam possesses Cap’s unwavering optimism and ability to see the good in everyone, even the enemy. Sam tries to reason with Karli (Erin Kellyman) despite being told repeatedly that she’s a lost cause. Karli tells him that he’s “hopelessly optimistic,” a quality Captain America was renowned for possessing, even mocked for it.

In some instances, there are even parallels in their dialogue. Sam says, “she’s just a kid” about Karli, echoing Steve’s reaction to young, troubled Wanda Maximoff (Elizabeth Olsen) in Captain America: Civil War.

In spite of their similarities, Sam is conflicted about taking up the mantle of Captain America as his country doesn’t reflect his identity; it’s a white man’s America. Yet, Sam embodies everything that Captain America should be. He’s honest, compassionate, patient, reliable, strong, and just. That’s how Sam and Steve became friends in the first place, after all: they connected over their similarities especially their time in the army.

The association between Sam Wilson and Captain America is something that both Steve and Bucky observe. Steve passes the shield to Sam in Avengers: Endgame and once Bucky has pried the weapon from Walker’s arm, he returns it to Sam. Bucky doesn’t hesitate; he knows that the shield belongs to Sam and that Sam is more Captain America than he ever could be.

On the other hand, the shield feels like family to Bucky, as it represents everything he idolized: the man beneath the uniform, Steve.

Before taking the super-soldier serum in Captain America: The First Avenger, Erskine (Stanley Tucci) makes Steve Rogers promise “that you will stay who are you, not a perfect soldier, but a good man.” Steve not only upheld that promise, but he also instilled it into Bucky as he supported (and fought for) the good man he was underneath his imperfections as the Winter Soldier.

Steve was the only person who believed that Bucky was a good man, and he nearly died to prove it in Captain America: The Winter Soldier. Steve didn’t give up on Bucky, which is the only reason Bucky hasn’t given up on himself.

Bucky religiously follows Steve’s example to try and adapt to contemporary life. He inherits Steve’s red book to catch up on everything he’s missed. “The book worked for him, so I figured it would work for me," he says. Bucky is so lost in finding his own identity that he relies on Steve, even when he isn’t physically there, to help him remember who he is.

Captain America lives on in The Falcon and the Winter Soldier

At the end of the fourth episode of Falcon and the Winter Soldier, John Walker (Wyatt Russell) has literally tainted Captain America’s legacy and shield with blood. But he doesn’t wipe out Steve’s legacy.

Very few individuals took Walker seriously as Captain America. That’s because Steve’s true legacy lives on, not in the shield or his suit, but in the values of Sam Wilson and Bucky Barnes.

Ultimately, these “couple of guys” are a testament to their “mutual friend.” Sam and Bucky have evolved to become who Steve Rogers shaped them to be. They are his legacy.