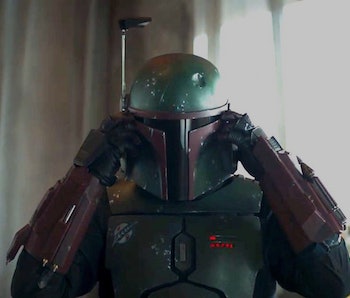 Boba Fett is cleaning up canon. In Disney+’s forthcoming Star Wars series, The Book of Boba Fett, the titular bounty hunter turns the galaxy’s underworld upside down. As he does so, the new series sets itself up to repair plot holes left behind by Han Solo.

Here’s how the new trailer for The Book of Boba Fett suggests a reboot for the crime canon of Star Wars. Speculation ahead.

What does Boba Fett want?

In the first trailer for The Book of Boba Fett, the premise of the series suggests we’re going to be 100 percent focused on Fett taking over the Hutt crime syndicate, roughly five years after the events of Return of the Jedi — and roughly around the time of the Season 2 finale of The Mandalorian.

As the Mando Season 2 post-credits scene revealed, Bib Fortuna had apparently taken over for Jabba following Jabba’s death in Return of the Jedi. Because we saw Boba Fett in his armor, getting his mercenary mojo back in Mando Season 2, it seems like his whole goal is to get back to doing what he did before, creating a better working environment for the scum and villainy of the galaxy.

The Boba Fett of this series appears to be a criminal reformer, eschewing his former status as “just a bounty hunter.”

It’s not exactly clear why Boba Fett is taking this path, but perhaps nearly getting killed by Luke Skywalker and the Sarlacc in Return of the Jedi has something to do with it. This Boba seems like a “simple man” trying to make his way in the galaxy, though that hasn’t really been working out. Jabba called Leia’s faux-bounty hunter Boushh “my kind of scum,” and perhaps Fett was never Jabba’s kind of scum.

In Mando, we got the sense that Fett had a stricter code of honor than previously assumed, making him more of an anti-hero rather than an outright hired gun. Though it’s difficult to forget that Boba Fett handed Han Solo to Darth Vader, the premise of The Book of Boba Fett tries to make you forget that detail.

Perhaps The Book of Boba Fett is going to explore the grey areas of Star Wars’ moral universe. In other words, Han Solo got tracked down by Boba Fett because Han Solo was a bad person. Boba Fett isn’t pretending to be good, but perhaps he’s better than Jabba.

How Book of Boba Fett can fix Solo

In Solo: A Star Wars Story, Han Solo learned of a fourth crime syndicate separate from the Hutts, the Pykes, and Black Sun. In Solo, Qi’ra works for Crimson Dawn, which seems to answer to the Shadow Collective, a crime agency that controlled the other syndicates.

But what about later? What the hell happened to Crimson Dawn after Rebels? Was the Shadow Collective still messing with Jabba by 9 ABY?

One of the coolest aspects of The Book of Boba Fett is that it can finally clarify sides of the “underworld.” In The Phantom Menace, it’s very unclear why the Republic puts up with the Hutts. Amid the chaos of the Clone Wars, the fact that all the crime syndicates flourish is easy to understand, and it’s even reasonable to assume that the Empire benefited from leaving the Hutts (and the Shadow Collective) alone.

But, in the post-ROTJ timeline of Mando and Book of Boba Fett, it’s all a little confusing. Din Djarin works for a Bounty Hunter’s guild, which apparently is regulated by the New Republic? (Who, to be clear, were formally known as the Rebel Alliance.)

The point is, the idea of who makes the law in Star Wars is already dicey after Return of the Jedi, meaning ideas of how “crime” is defined have become even more confusing. With Boba’s quest to create a more equitable underworld, questions about the criminal underworld’s status quo can suddenly be answered. As Boba Fett is planning on reforming his little corner, explaining how the underworld operated before will be a top priority for the series.