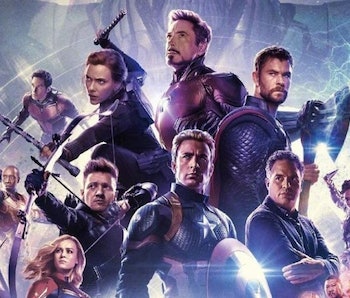 Like most other movies, 2020's Marvel movies have seen their release dates shift further and further down the calendar. Black Widow was originally supposed to come to theaters in May, but has since been moved to November 6, bumping The Eternals to February 2021. Marvel hasn't yet announced plans for another full-on Endgame-style crossover, but given the enormous box-office success of the Avengers' latest outing, it seems all but inevitable. But when the Avengers 5 release date finally does roll around, we expect the roster of Earth's mightiest heroes will have changed quite a bit.

Avengers: Endgame revealed a brutal and uncompromising side of Hawkeye. The archer went on a global killing spree as revenge for his family’s disappearance at the hands of Thanos. However, the famed archer might be putting down his bow and arrows soon. Hawkeye will be training a new archer in his self-titled Disney+ series. That new protégé could officially replace him on the team in Avengers 5.

Marvel Studios confirmed Hawkeye would come to Disney+ at San Diego Comic-Con 2019. The series is currently scheduled to air on Disney+ in the fall of 2021. Jeremy Renner will reprise his role as Clint Barton as he trains Kate Bishop, the first woman to take up the mantle of Hawkeye.

Hailee Steinfeld was reportedly in talks to play Kate last year. There has been no official confirmation from Disney or Marvel on whether Steinfeld’s deal has closed. However, a leak from The Illuminerdi claims the actor is onboard to play Kate on Disney+. We’ll have to wait and see what happens with Steinfeld, but Hawkeye has reportedly landed a few directors to work on the show. That means that things are gradually moving forward.

Details about Hawkeye’s plot are scarce at this point. But, since Clint will be training Kate, it’s possible he's setting her up for a leadership role among the next generation of Avengers. Following her appearance in Hawkeye, Kate could show up next as an official member of the team in the yet-unannounced Avengers 5.

In the comics, Kate is a prominent member of the Young Avengers and a master archer, martial artist, and swordswoman with extensive combat skills. First introduced in 2005’s Young Avengers #1, Kate is the third superhero to take up the Hawkeye title after Clint, who is presumed dead around that time.

Kate is independent and gutsy, unafraid to stand up to Captain America. Cap's so impressed by her that she eventually requests that she take on Clint’s codename officially. One of her first missions with the Young Avengers leads to the defeat of the menacing supervillain, Kang the Conqueror, highlighting her formidable might and heroism.

By this point, Clint has become Ronin (which we saw him do in Endgame) and offers to mentor Kate. It’s unclear how Hawkeye will introduce the character or whether she’ll already be a superhero at the time Clint starts mentoring her.

Kate has played a pivotal role in both Marvel’s Civil War and Secret Invasion storylines. There's a lot of evidence to suggest that Avengers 5 may finally adapt Secret Invasion onscreen. It’s possible that Kate's Hawkeye training will prepare her to fend off a potential Skrull invasion in Avengers 5.

It’s possible that Clint will find Kate in the same way that he did in the comics, or that Kate will figure out the Avengers’ identities and track them down somehow. It’s doubtful that she’ll already be leading the Young Avengers in the Disney+ series, but Clint offering to mentor her seems like the best way to set her up to lead the group eventually.

Conversely, Kate could be training to replace Clint when the time comes to regroup. He’s clearly moved on from Hawkeye in general and the Avengers have lost three of the six original members. It’s high time that the MCU introduced an entirely new team, one that would potentially include Kate, Black Widow’s successor and others. Clint’s mentorship may mean that she will have the support of the remaining Avengers and their knowledge at her disposal. Whatever the case, Kate’s training in Hawkeye is the clearest path toward a future with the Avengers.

Hawkeye premieres on Disney+ in fall 2021.