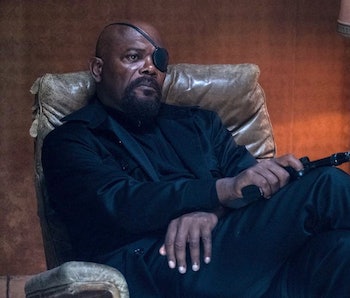 Avengers: Endgame was the result of 20+ MCU movies that built up to an iconic battle against Thanos, uniting characters from every corner of the shared universe for a common goal. It’s hard to imagine how Marvel Studios might mimic the same success over the next two phases. However, Captain Marvel, Spider-Man: Far From Home, and even WandaVision seem to be laying the groundwork for Avengers 5 to tackle the Secret Invasion storyline from the comics.

What is Secret Invasion?

In the comics, Secret Invasion was an eight-issue crossover event that rallied together all of Marvel’s heroes after the Skrulls, technologically advanced shapeshifting aliens, attempt to claim Earth as their own following the fall of their empire. The Skrulls essentially believed that Earth was rightfully theirs.

Of course, the biggest twist was that the Skrulls had slowly infiltrated Earth for years, shapeshifting into superheroes or high-ranking officials of S.H.I.E.L.D. to obtain knowledge to send back to their leader Veranke. Following the long-term invasion, the Skrulls wage a full-blown attack against the Avengers in an attempt to destabilize the superheroes and advance their takeover of Earth.

First introduced in Captain Marvel, the Skrulls have been depicted as refugees who fled their home planet after it was destroyed by the Kree, an alien race ruled by the Supreme Intelligence. Spider-Man: Far From Home solidified their uncanny ability to shapeshift after they were revealed to have been impersonating Director Nick Fury and Agent Maria Hill throughout the film. They had Peter Parker and MCU fans fooled, that’s for sure.

Fast-forward to WandaVision. Photos from the set of the Disney+ series reveal the Sentient World Observation and Response Department (S.W.O.R.D.) will play a role in the story. Fans have also speculated that Fury was busy overseeing the agency’s new headquarters in space, which is why Skrulls had taken over his job in Far From Home. The agency is meant to keep an eye out for extraterrestrial threats. However, it’s possible that the organization is simply an extension of the Skrulls’ future takeover of Earth.

Yes, the Skrulls we’ve met so far seem harmless (and they’re not all bad), but the MCU has already shown us how easily they can slip in and out of society undetected. They could be absolutely anybody, so who’s to say that the Skrulls haven’t already begun their infiltration of Earth?

It’s possible Phase Four of the MCU will further embed the Skrulls into high-ranking positions, only to later introduce Veranke and her plans. Marvel doesn’t have to do much in the way of building up to the Secret Invasion storyline beyond showing the Skrulls shapeshifting in a Captain Marvel 2 post-credits scene.

After all, that’s what happened with Thanos’ Infinity Stone plot, which was primarily relegated to these post-credits scenes before Avengers: Infinity War unveiled his whole plan. It’s possible that Avengers 5 will focus on the main invasion while the Skrulls secretly work in the background throughout Phase Four. Of course, it’s ultimately unclear if Secret Invasion is up next in Marvel’s grand plans, but it seems the seeds have already been planted.

More like this
Entertainment
Jan. 26, 2023
Corey Stoll could have the chops to make a live-action M.O.D.O.K. work
By Mónica Marie Zorrilla
Entertainment
Jan. 25, 2023
The MCU could bring back a hero from its most underrated TV show
By Dais Johnston
Entertainment
Feb. 1, 2023
The Batman: Part II — Everything we know about the Robert Pattinson sequel
By Gabrielle Bondi
LEARN SOMETHING NEW EVERY DAY.
Related Tags
Share: