“Sure you’re ready for that, Mr. Whitman?” 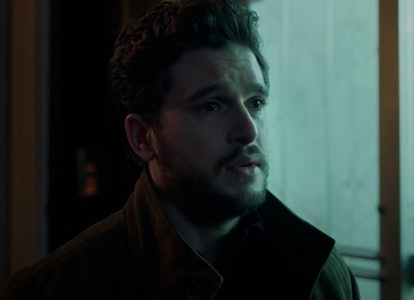 What does the future hold for Dane Whitman? The character, played by Game of Thrones star Kit Harington, makes his Marvel Cinematic Universe debut in Eternals as the modern-day human boyfriend of Gemma Chan’s Sersi.

Dane doesn’t have an especially large role in Eternals, appearing mostly in just a handful of scenes at the beginning and end of the film. However, Eternals goes out of its way to set the character up with a bright future in the MCU — one that’ll see him assume his Black Knight mantle from the comics.

A surprise, last-minute Eternals cameo suggests that Dane’s future as Black Knight may also involve him teaming up with several other powerful heroes set to make their MCU debuts in the coming years.

The Vampire Hunter Arrives — Eternals’ second post-credits scene sees Kit Harington’s Dane Whitman coming very close to picking up the Ebony Blade for the first time, only to be stopped by the voice of an unseen man. “Sure you’re ready for that, Mr. Whitman?” the voice asks, just before Eternals cuts to black for the last time.

The scene leaves the unseen character’s identity a mystery, but Eternals director Chloé Zhao has revealed who it was that prevented Dane from picking up the cursed weapon: Mahershala Ali’s Blade. Asked by Fandom if it’s really Ali’s voice that fans hear the end of Eternals, Zhao said, “That was the voice of one of my favorite superheroes, Mr. Blade himself. Blade, Blade, Blade, yeah!”

The fact that Eternals ends with the introduction of Ali’s Blade (at least his voice) is undeniably exciting, but it also raises a number of questions. Specifically, Zhao’s comments force us to ask: What does Blade want with Dane Whitman, and what does his introduction tell us about both characters’ futures in the MCU?

Marvel’s Midnight Sons — In the comics, Harington’s Dane Whitman and Ali’s Blade have both, notably, been members of MI13, a group set up by the UK government to protect the world from paranormal threats. With that in mind, it’s possible Dane and Blade could end up being the first two members of the MCU’s MI13.

Alternatively, it’s possible that the two characters could go on to become members of another powerful Marvel Comics team: the Midnight Sons.

In the comics, the Midnight Sons were a superhero group specifically assembled to take on supernatural and occult threats. While Dane Whitman/Black Knight has never worked with the group, the team has counted characters like Blade, Wong, Morbius, Doctor Strange, Moon Knight, Man-Thing, Werewolf by Night, and Ghost Rider as members over the years.

Numerous rumors have also surfaced in recent months saying that Marvel is in the midst of developing a Midnight Sons movie. Upcoming projects like Doctor Strange in the Multiverse of Madness, Moon Knight, and Blade are all said to introduce characters that will go on to be members of the Midnight Sons in the MCU.

Marvel may also be planning solo projects for characters like Werewolf by Night, WandaVision villain Agatha Harkness, Black Knight, Ghost Rider, and Brother Voodoo, with the intention of bringing the franchises and characters together for a Midnight Sons crossover event.

Given the cursed nature of the Ebony Blade, Dane Whitman would certainly make sense as a member of any MCU version of the Midnight Sons.

The Inverse Verdict — Mahershala Ali’s voice cameo in Eternals raises the possibility that the Blade standalone film could be the next time we see Dane Whitman on-screen. That film does not yet have a release date, though many expect it to hit theaters sometime in 2023.

But regardless of when we see Whitman again, Blade’s comment to the character at the end of Eternals suggests that their futures in the MCU may be intertwined. Whether that means the two characters will ultimately team up in a Midnight Sons or MI-13 film remains to be seen.

The other exciting possibility is that Marvel is already moving pieces around its Phase Four chessboard in preparation for Avengers 5. While there’s no solid confirmation as of yet that Marvel is heading toward another Avengers entry to cap off its current phase, characters as potentially game-changing as Blade and Black Knight could become power players in the MCU’s bright future.

And with Iron Man and Captain America no longer in the picture to head up Earth’s mightiest heroes, the Avengers are certainly in need of leaders. Blade and Black Knight could step up in a dramatic fashion.