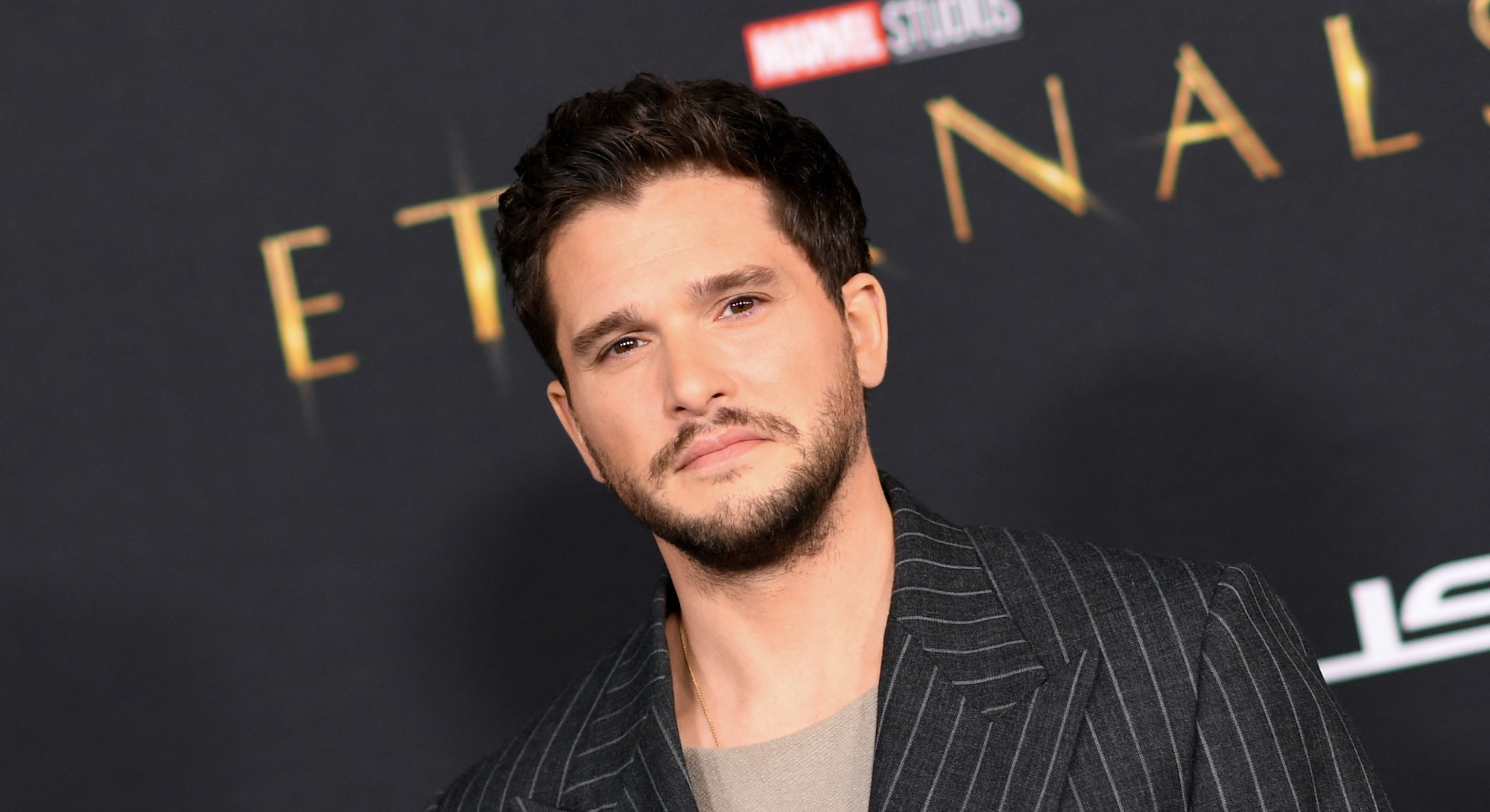 As a mortal man standing before aliens, Kit Harington, asks the most important question anyone could ask in the Marvel Cinematic Universe:

It’s a good question. Eternals, directed by Oscar-winner Chloé Zhao and based on Jack Kirby’s sci-fi comic books, follows the reunion of ten alien warriors, “Eternals,” who’ve spent centuries hiding from — or amongst — humankind. Eternals takes place after Avengers: Endgame, so even these immortals lived through the catastrophe called “the Blip.”

Warning: Minor spoilers for Eternals ahead.

Dane Whitman (Harington) is a museum scholar who comes from a very interesting lineage of his own. But Eternals isn’t concerned with what Dane is meant to be, only what he is right now. And who he is is a person with a very good question. Why didn’t the Eternals help the Avengers fight against Thanos? (Answer: They’re not allowed to interfere with Earth’s conflicts unless it involves their sworn enemies, the Deviants.)

But Harington fought his own battle with Thanos: Learning how to say his name.

“I’ve been saying ‘Thanos’ wrong,” Harington tells Inverse, revealing he used to over-emphasize the “O” in Thanos’ name. “I could not get his name right. And that scene, which is key, took me about ten takes to get. I was like, ‘Can I not call him this?’”

Eventually, Harington learned to speak the name of the Mad Titan.

“I know you have to get his name proper,” he adds, “It’s an important question. Someone’s got to ask it. I think all of the Eternals, being wrapped up with who they are, it’s got to be the human who goes, ‘Why?’ I think he’s the perfect person to pose that question.”

As one of the “few humans” in Eternals, Harington says it was “a responsibility” to be the audience vehicle into a centuries-spanning epic.

“If the audience wants humanity to be saved, you’ve got a responsibility to represent what needs saving,” Harington says. “You get a short period of time with this character. You’re gonna want the audience to like you. That’s a challenge. You can’t just be affable, there’s got to be something different about you.”

That “something different” could be Dane Whitman’s big secret: His destiny as Black Knight, an ancestral mantle that imbues him with powers through possession of the Ebony Blade, a magical sword akin to Excalibur. While the Black Knight as a comic book character dates back to 1955, Dane made his first appearance in The Avengers #47 in 1967 and has been an official member of the Avengers on many occasions.

When Kit Harington first learned about his Marvel role, he had no reservations about playing another character who swings a sword. “That was always fun,” he says, referencing his time spent as Jon Snow. But Harington says that as far as Eternals is concerned, he is not the Black Knight. For now.

“Nate Moore, the producer, approached me saying, ‘Here’s this character.’ Obviously, you Google immediately,” he says. Though Harington did research, he closed his browser tabs when he realized that deep comic book lore wouldn’t factor into his Eternals performance.

“I did the reading on him and I quickly forgot about it as soon as I can,” Harington says. “None of that stuff’s real. What’s real is this movie, and who he is in this movie. He’s just Dane Whitman, at the Natural History Museum.”

In conversations with director Chloé Zhao, “we talked about how he represents humanity and that he’s a really good guy,” he says. “He’s chill. Sometimes that’s hard to do on camera.”

But Dane does make a decision Harington believes is a critical one for the film: He gives space to his girlfriend, the Eternal “Sersi” (Gemma Chan) to save the world with her ex, the flying “Ikaris” played by Richard Madden — one of Harington’s co-star on Game of Thrones.

“What I admire about [Dane] is he goes, ‘You work out whether you like this guy, and I’ll step [back in] if you’re ready,’” Harington says. “That’s the mature response. More mature than Ikaris. And that’s from a mortal who’s only been around for a tiny amount of time. It takes strength to say, ‘You do you, I’ll see if you come back.’”

Besides, “What’s he going to try? Compete with Ikaris?”

Well, why not? One moment teases something between Ikaris and Dane, each played by former Stark brothers.

“We just had the one scene,” Harington says. “You get the feeling those two don’t like each other. It’s hard if you’re both in love with the same person. Richard is a very good friend, we haven’t spent much time in front of cameras. So that little moment we have, it’s quite hard not to laugh.”

Adds Harington, “It’s doing a scene with your best mate. You’re like, wait, are we actors?”

Even being a normal man was a change for Harington, who has mostly starred in costume epics like Game of Thrones and period dramas like BBC’s Gunpowder. “What I really liked about him is what I wasn’t used to, contemporary clothes. Jacket and jeans was refreshing for me. That was my journey into it.”

Of course, Harington is aware there’s more that awaits Dane Whitman in the MCU.

“I know at the end of the movie we see him find his sword. So we assume that's going to come into play,” Harington says. “As far as the future goes, [Marvel said] to me, this could be a continuation. That’s all I needed to hear.”

Eternals is now playing in theaters.