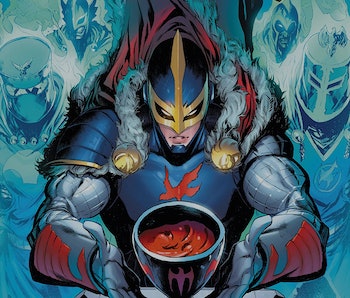 The Black Knight may be a new superhero to fans of the Marvel Cinematic Universe. But if what Eternals suggests to be true, then the Black Knight has galloped in the MCU long before even Iron Man suited up in a cave (with a box of scraps).

Here’s what one seemingly throwaway line in Marvel’s Eternals, out now in theaters, reveals about the Black Knight and Kit Harington’s role in the MCU as Dane Whitman.

Warning: Spoilers for Eternals ahead.

Who is Dave Whitman’s uncle in Eternals?

About halfway through Eternals, “Sersi” (Gemma Chan) FaceTimes with Dane (Harington) and tells him to “make up” with his uncle before the world ends. Sersi knows that the end of the world is imminent, and she warns Dane to talk and forgive him, or else they’ll all die with hatred in their hearts. Dane dismisses the idea, and they hang up so the plot can move forward.

But what Sersi tells Dane is really telling about the MCU’s future plans for Dane Whitman. In the comics, not only is Dane the Black Knight, but it’s a mantle he inherits from his dying uncle, who used the Black Knight identity... as a supervillain.

Who is Nathan Garrett in Marvel?

Preceding Dane Whitman’s comic book debut in 1967, Nathan Garrett made his first appearance in the pages of Marvel’s Tales to Astonish #52. He appeared as a villain, using the mantle of the Black Knight borrowed from his ancestor, Sir Percy, a member of King Arthur’s court. (Sir Percy starred in his own comic book series Black Knight, published by Marvel predecessor Atlas Comics in 1955.)

In the mid-60s, Marvel resurrected the Black Knight with Nathan Garrett, who finds the magical Ebony Blade at the tomb of Sir Percy. But when Percy’s ghost deems Nathan unsuitable to carry the mantle, Nathan uses his genius intellect to build himself his own arsenal of weapons that combine medieval weapons and modern science.

Ever seen a knight’s lance shoot lasers? That’s what Nathan Garrett could do.

On his deathbed, a repentant Nathan asks Dane to redeem the Black Knight name and restore their family’s honor. Dane agrees, and in becoming the new Black Knight, fights as a superhero, claiming occasional membership with teams like the Avengers.

Eternals isn’t the first time the MCU has teased the Black Knight. In 2016, an Ebony Blade prop was made as an Easter egg for Doctor Strange, though it was ultimately left out from the movie. Even now in Eternals, the MCU stops short of letting Dane Whitman armor up in his blood right. But it’s only a matter of time before the Black Knight charges into the MCU.

In Eternals, there exists a rift between Dane and his uncle Nathan. Exactly what caused them to be distant is unclear. And when Dane later meets his uncle offscreen, it’s similarly unknown what took place. But it’s evidence that the MCU is adhering to comic book canon in some way.

Perhaps Dane distanced himself due to Nathan’s criminal history. Or maybe Nathan kept himself away from Dane, knowing that he wouldn’t approve of his supervillain activities. Whatever the case, there was and is something keeping Dane and Nathan apart.

At the end of Eternals, Dane appears to have learned something about his family. (He may have even patched things up with his uncle, though it’s never made explicitly clear.) What’s only known is that Dane has learned about the Black Knight and his family’s history with it, and he appears intent on carrying on the family business.

Eternals is now playing in theaters.,