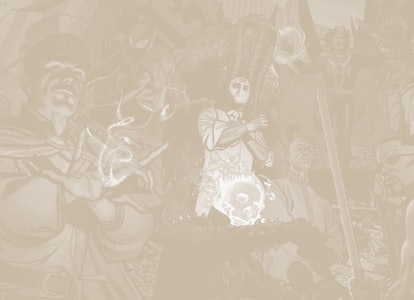 Marvel fans are still eagerly waiting for updates on a potential fifth Avengers entry. But as the superhero studio moves boldly beyond Endgame into Phase 4 of its Marvel Cinematic Universe, a number of major crossovers are already in the works.

One of The Falcon and the Winter Soldier’s most unexpectedly thrilling moments was its tease of a Thunderbolts or Dark Avengers team, to be formed and potentially overseen by Contessa Valentina Allegra de Fontaine (Julia Louis Dreyfus). Characters like John Walker (Wyatt Russell) and Black Widow’s Yelena Belova (Florence Pugh) could rank among its members. Another growing rumor concerns a Young Avengers film coming down the line, with the MCU steadily introducing characters who’d joined that team in the comics.

But the latest Marvel leak points to another non-Avengers crossover in the works: one of massive, mystical proportions.

That Hashtag Show reports that, as previously rumored, Marvel is planning to capitalize on the success of its Avengers films by developing new super-team crossover movies, including not only Young Avengers and Dark Avengers/Thunderbolts but also a Midnight Sons movie.

Featuring both existing and new MCU characters – including Doctor Strange (Benedict Cumberbatch), Scarlet Witch (Elizabeth Olsen), Blade (Mahershala Ali), and Moon Knight (Oscar Isaac) – Midnight Sons would find the more supernaturally inclined players in the MCU joining together to face down the world’s darkest and most unsettling threats. The likes of Ghost Rider, Hannibal King, and Hellstrom could also play roles in Midnight Sons, with Ghost Rider rumored to be making his MCU debut in Doctor Strange in the Multiverse of Madness and the other two apparently showing up in Blade.

According to the leak, Marvel plans to make Blackout — member to a race of comic-book demons known as the Lilin — the primary villain of Midnight Sons, with “teases of Mephisto” throughout the film. But who are the Midnight Sons, and what would it mean for them to enter the MCU?

Who are Marvel’s Midnight Sons

The Midnight Sons are, essentially, the supernatural Avengers. A group of powerful Marvel heroes who unite to take down specifically mystical and evil threats, the likes of which they’re all uniquely suited to combat.

In the comics, this team is brought together by Doctor Strange, and its original incarnation included characters like Morbius, Blade, Hannibal King, and two versions of Ghost Rider (Johnny Blaze and Danny Ketch). Over the years, other members of the team have included Wong, Moon Knight, Hellstrom, Iron Fist, Man-Thing, Doctor Voodoo, and the Scarlet Spider.

Given his history in the comics, Blackout makes complete sense as the villain for a potential Midnight Sons movie too. The team was originally formed by Strange in order to stop the Lilin from invading Earth. With Lilith, the Mother of Demons herself, heading this charge, Blackout was just one particularly deadly member of a terrifying demonic race. If Blackout is the central antagonist of Midnight Sons, such a role could find him enabling Lilith and the Lilin to attack.

But the Midnight Sons have fought plenty of other notable villains in the comics. One storyline even saw a version of the team working to stop Mephisto from taking over Las Vegas by claiming the souls of the city’s residents and turning heroes like Falcon and Captain Marvel into Ghost Riders.

The Inverse Analysis — While this report is of course unlikely to be confirmed by Marvel anytime soon, the studio’s Phase 4 plans already include key building blocks for Midnight Sons. Such a crossover is an exciting possibility, one that paves the way for Marvel to dive headfirst into the darkest, weirdest stories from the supernatural side of Marvel comics lore.

We already know Doctor Strange in the Multiverse of Madness will position both Stephen Strange and Scarlet Witch as the two most powerful mystical heroes in the MCU. It was also recently reported (by That Hashtag Show) that Doctor Strange 2 will feature the debut of Johnny Blaze, aka Ghost Rider, further pushing the MCU into supernatural territory. Marvel’s Moon Knight series is currently rolling cameras as well, and the studio’s Blade movie, starring Mahershala Ali, remains in active development. Combined, those three titles could provide the perfect foundation for Midnight Sons.