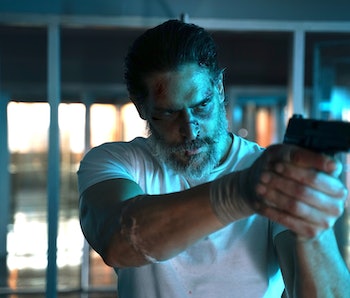 A bearded Joe Manganiello in a torn-up raincoat asks a teenager in a seedy dive bar: "Do you know anything about string theory?" The teen, Hamster, an aspiring crime reporter played by Skylan Brooks, shakes his head. Manganiello's homeless superhero responds, "Ok. Uh, shit."

This is Archenemy, an original superhero crime thriller from director Adam Egypt Mortimer (Daniel Isn't Real) in his third feature film. In a new twist on the superhero story, Mortimer outmaneuvers "edgy" shows like Watchmen and The Boys with a new wrinkle in the genre's cape: What if a superhero was real but no one believed them?

What unfolds is an unusual adventure about trust and friendship forged in a world without truth or justice. Though Archenemy isn't the most elaborate or thoughtful take on superhero stories, it's enthralling in its own approach to the genre.

Opening in theaters and digital on December 11, Archenemy is about the unlikely bond between two individuals: Hamster, who yearns to escape hood life by working as a crime blogger for a vapid Gen-Z lifestyle website; and Max Fist, an alcoholic and crystal meth-addicted homeless man who claims to be a stranded superhero from another dimension. Meanwhile, Hamster's sister, Indigo (Zolee Griggs), gets wrapped up in a criminal underworld that forces Max Fist to spring into action without his superpowers.

If one chooses to believe Max Fist (and Archenemy really wants that question to drive your interest), he arrived on Earth during a climactic battle against his arch-nemesis, Cleo (Amy Seimetz), where Fist punched through a vortex that brought him to our world. He now lives on the streets, stranded, drunk, and powerless. "I smashed my way to this bullshit reality to save Chromia," Manganiello gruffs through shots of whiskey paid for by bored bar patrons. A short few minutes later, he buys crystal meth from a corner dealer.

Do I believe Max Fist? That's the central question of Archenemy. As Manganiello utters lines with nonsense phrases like "cosmic blood" and "solar guns" through inebriation, Archenemy toys with audiences who are likely just as confused or unconvinced as Hamster.

Supporting the ambiguity are animated sequences — illustrated in arresting pink and blue palettes — that reveal Max Fist's origins (or delusions) on Chromia and occupy that inner space between reality and fantasy. This cleverly creates a stark division between "superheroes" and "reality" while giving Archenemy its own identity above other "dark" comic book movies. The darkest thing about Archenemy isn't its gruesome violence, though there's plenty of it. It's not knowing if Max Fist is for real.

👉Read our interview with the director of Archenemy.👈

In 2020, superheroes aren't so cast-iron that even Archenemy's competently subversive appeal isn't enough to rethink everything. Superheroes have gotten the "dark and gritty" treatment for decades, and even films pre-Marvel Cinematic Universe challenge conventions. (Kick-Ass, the superhero movie based on Mark Millar's aggressive comic book series, turned 10 years old this year. We've been at this for a while.) In a time when Watchmen wins Emmy trophies and there is (hilariously misguided) Homelander cosplay at protests, Archenemy isn't bringing anything terribly new to the table. But it still knows how to serve a mean dish.

Archenemy also delivers some not-so-subtle visual commentary on which types of superheroes could actually exist in the real world. In Max Fist's head, he's a noble god-like Superman. But when the plot escalates in our gritty, crime-ridden dimension, his costume strongly evokes Marvel's brutal vigilante, the Punisher. One can't help but feel that Archenemy doesn't believe in real superheroes, either.

Manganiello is easily the MVP of Archenemy. As Max Fist, he takes flight as a brute with a Silver Age scientist's mouth. Through his earnest delivery of lines like, "There's a fragment of cosmic blood in this synthetic analog" (whilst looking at a finger's pinch of meth), Archenemy's unique alchemy of comic book fun and neo-noir crime drama is made crystal clear. It's a fish out of water situation. Max Fist is a Marv Wolfman superhero interrupting a Michael Mann movie, and Archenemy knows how to make that the best movie possible.

Archenemy is an overall fantastic feature that loves superhero stories and seeks to push the genre into new territory, but it's not always successful. The surprisingly unambiguous ending, which provides an answer to Max Fist's story, cuts the movie at its feet. And the rough animation in the movie's comic-inspired scenes also suggests it might have benefited from a slightly bigger budget.

But the journey of Archenemy is more fun than its destination. So long as you're willing to believe a drunk in a raincoat blabbering about cosmic dimensions, you might find yourself on a worthwhile ride.

Archenemy will be released in theaters and on Digital and VOD December 11.

More like this
Entertainment
8.4.2022 10:30 AM
Batgirl’s cancellation is bad for all superhero movies — here’s why
By Dais Johnston
Entertainment
8.3.2022 4:17 PM
Prey is an old school throwback that brings new life to the Predator series
By Eric Francisco
Culture
8.16.2022 11:30 AM
25 years ago, Shaquille O'Neal made the worst superhero movie of all time
By Laura Kelly
Related Tags
Share: