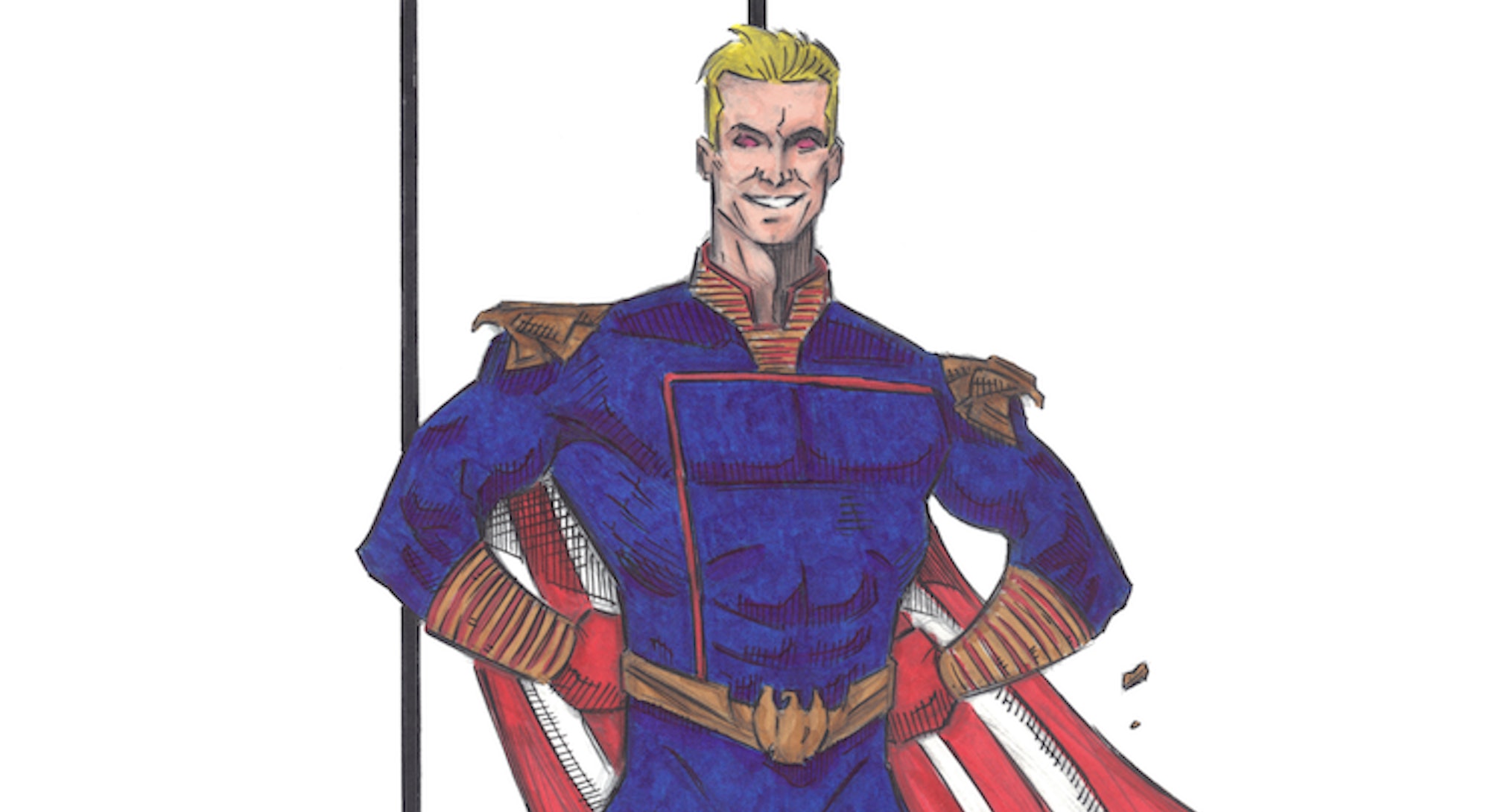 If you’ve seen even a single episode of The Boys, you already know we’re talking about Homelander. He’s one of the quote-unquote “superheroes” in the series, which debuted in simpler times (the summer of 2019), and is played with simmering villainy by Antony Starr. But the 44-year old New Zealander isn’t merely describing his character, he’s also giving a preview of The Boys Season 3.

Starr’s calling me from Bulgaria, where he’s filming the horror movie Cobweb (he won’t share details about the Lizzy Caplan-led thriller, but his voice goes up an octave as he lists his favorite horror movies from Halloween to The Excorcist). That the character he plays on The Boys — a corrupt “Supe” who dons an American flag cape — is a homicidal maniac in Season 3 just about sums up all he knows, though.

Here’s how the conversation between Starr and The Boys showrunner Eric Kripke went:

Starr: “Where are we going in Season 3?”

Kripke: “Here’s the only two words I’ll tell you about Homelander in Season 3: Homicidal. Maniac.”

Starr: “Ok, I think we’ve been doing that, but if you're now saying we're gonna do that, I think it's going to be pretty bad. Pretty intense.”

How can The Boys — a series known for sticking bombs up people’s butts and detonating them, driving a boat through the stomach of a whale, and featuring an actual Nazi as a world-famous superhero — ratchet up the intensity? Starr has a few theories.

For one thing, there’s Black Noir. The silent-but-deadly member of the corrupt superhero team Homelander leads has a compelling story from the comic books that has yet to play out.

In the comic book series on which The Boys is based, readers eventually learn that Noir is a clone of Homelander. This occurs during a confrontation that ends with pretty much everyone dying (including the U.S. president). But Starr doesn’t think the series will play that card, even if it would seem to match Kripke’s characterization.

“That's one of the things Eric has kept pretty close to his chest,” Starr says of Black Noir’s true identity. “I don't know if they're gonna go down that route. The show takes a lot of license when it comes to the adaptation from graphic novel to screen.”

Elsewhere online, fans have speculated that Homelander could have more than one child. Season 1 of The Boys ended with the revelation that Starr’s character had a son who’d been kept secret from him for years, and Season 2 explored the fallout as he yo-yoed between a violent mental breakdown and trying to be a good father. Learning that he has even more kids would certainly push Homelander into “homicidal maniac” territory, and Starr agrees.

“No one’s said that to me, but it wouldn’t surprise me if it turned out to be true” Starr says when I pitch him the fan theory. “I mean, why not? Maybe Homelander’s got a string of kids all over the place.”

If The Boys really wants to level up its homicidal maniac in Season 3, the best way to do it would be to find the dial in Kripke’s brain labeled “Homelander is a metaphor for America” and crank it up to 11.

When The Boys premiered, Homelander felt like a funhouse mirror reflection of Superman or Captain America. With an accent as flat as the corn fields where Clark Kent grew up, Starr transformed himself from a brown-haired Kiwi into an Aryan ideal: The character of Homelander has super-strength, can fly, and is in possession of a pair of laser eyes. Homelander projects an image of do-goodery and hope to the world, before turning around and letting an entire plane full of people die to avoid some bad press. It was a biting satire of our collective superhero obsession, enabled by Amazon’s hands-off approach, and perhaps a mission to take market share from Marvel.

“Normal superheroes are bound to be very morally upright,” Starr says. “We've invaded that whole thing. The tone of the show is very adult, so we can really dig into it in a way the others can't because they’re family-friendly. We’re not Disney. We’re not a slave to the same markets. We can push into some delicate areas with a little more confidence.”

The Boys didn’t invent the idea of edgy superheroes. Starr points to Christopher Nolan’s Batman trilogy as the beginning of a new era, and Deadpool delivered a similar mix of comedy and R-rated violence with just a little less nihilism. But The Boys pushed the subgenre past its limits, and there may be no going back.

When I ask if he thinks we could ever get another classic movie about Superman (the character who so clearly inspired Homelander) as the beacon of hope he was in the Christopher Reeves era, Starr is doubtful.

“It's sad, but I think people want something more layered with a little bit more edge now,” he says. “Fans now are too savvy to put up with something too saccharin that isn’t reflective of their reality at the moment.”

The Dark Knight may have closed the door on the idea of a wholesome superhero, but The Boys nailed it shut, and that was just in Season 1.

In Season 2, The Boys twists Homelander into something even scarier, a funhouse version of America itself. Undeniably influenced by President Donald Trump and his apparent white supremacist sympathies (“Stand back and stand by”), Starr’s character became a tantrum-throwing manchild watching negative news reports in the dark as he clenched and unclenched his jaw. (“I have no idea that it's happening,” the actor says of the now-iconic facial expression. “It’s kind of weird, but maybe I need to get control of it because I do often get misunderstood in real life.”)

Adding fuel to the Dumpster fire of Homelander’s psyche is Stormfront, played by Aya Cash as a social-media-savvy superhero with a secret backstory and a name shared with the infamous white power forum. (Spoiler: she’s a literal Nazi from the 1940s who’s superpowers keep her appearance youthful). It doesn’t take long for Homelander to go from treating Stormfront as a threat to seeing her as a tool to maintain power — an unholy alliance consummated with the most disturbing sex scene I’ve ever seen on TV.

Speaking to Inverse in August ahead of the Season 2 premiere, showrunner Kripke doubled down on a simple truth. Having a Nazi be the bad guy on your TV show shouldn’t be a statement. “I wanted to have a Nazi villain, and it's crazy to me that that's even up for debate. That's the most generic villain possible.”

And yet, here we are. It’s hard not to see the parallels between The Boys Season 2 and the year 2020 (“let's face it, one big old, crazy concoction of a year,” Starr says). The script may have been written long before Trump told the Proud Boys to “stand by,” but as both Starr and Kripke point out, The Boys didn’t predict anything. It just read the room.

“You could look at some very, very current world leaders that won’t denounce white supremacy,” Starr says. “When those things are allowed to blossom, when the people that can shut them down, and should shut them down, don't, it's really emboldening for them. We've seen it for the last few years. Homelander is a direct reflection of that.”

Plenty of actors could have made a meal out of Homelander (possibly the best-written satire of the 21st century so far) but Starr executes with a subtlety that allows him to shine. And that’s before the CGI adds in his deadly laser eyes. Prior to The Boys, Starr was best known as the star of Banshee, a Cinemax original with a small but loyal following. But on Amazon, he’s found what feels like a historic character, the kind that will forever be linked with its actor, like Alan Rickman and Professor Snape or Julie Andrews and Mary Poppins.

"Ant is one of the best actors I’ve ever worked with, hands-down, and I've worked with incredible actors,” says his co-star Aya Cash, who plays Stormfront. “Ant makes some of the most inventive decisions I’ve ever seen on screen.

“There are a lot of easy choices to make when you’re playing a villain, and Ant somehow makes the opposite choice and makes it scarier.”

Starr’s outsider status as a New Zealand native might also give him an edge, especially when it comes to skewering the idea of American exceptionalism, revealing the vanity and racism beneath.

“Patriotism in America, it’s almost religious,” he says. “It's pretty dogmatic. I'm not a slave to that. That definitely allowed me to poke into different elements of the character that an American might not see.”

Depending on how things go on November 3 (and beyond), The Boys may become even more relevant in Season 3. As the lead actor on a hit show, that would be good news for Starr, but as a human being with the sense of empathy his character clearly lacks, it’s a double-edged laser blast at best.

“It would be great if this show didn't have any resonance with the real world,” he says, “but it's also great to be involved with a show that is a hell of a lot of fun and also has something to say and isn’t afraid to kick the hornet's nest.”

But no matter which direction the real world goes next, Starr is confident that The Boys will remain as relevant as ever as long as Kripke and the rest of the rights keep pouring their thoughts and feelings into each new script.

“These scripts were all written a long time ago and the ideas in them are timeless,” he says. “but they really have spiked this year. It just happens to dovetail with the material.”