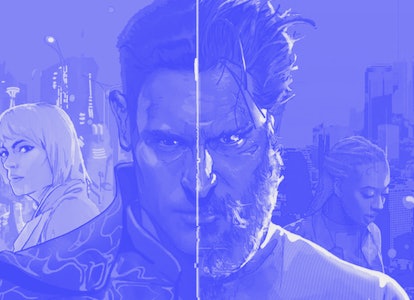 "I always loved what superheroes do in superhero comic books," Mortimer tells Inverse. "The wild swings they take narratively and aesthetically have so much more possibility than the movies."

With his latest film, the superhero thriller Archenemy, Mortimer hoped to make a superhero movie as high-level as any prestige graphic novel.

"What's it like to make a contemporary movie about a superhero that treats an audience as sophisticated as a comic book audience? I wanted to do that in a superhero movie," Mortimer says. "We talk about things like Watchmen or The Dark Knight being a deconstruction of superheroes. But I'm so much more interested in what happens after [the deconstruction]. Let's build a gleaming cathedral of ideas."

In theaters, Digital, and Video on Demand on December 11, Archenemy stars Joe Manganiello as Max Fist, an alien superhero from a parallel dimension stranded in our reality. Homeless, drunk, and high on drugs, Max Fist befriends aspiring reporter Hamster (Skylan Brooks) and swears to protect him and his sister Indigo (Zolee Griggs) from a crime syndicate.

"Joe’s great because he looks like Superman and is obsessed with comic books," the director says. "Good actors come with great ideas, and Joe was able to do that because of his total understanding of comic book mythos."

“Grant Morrison is a huge influence on me.”

Conceived by Mortimer as "The Wrestler but with a superhero," the story spiraled into something else faster than The Flash could run. "The movie came from me wanting a level of realism and tragedy. It started to rapidly spiral into the multiverse and cosmic questions, questions about memory and reliability and timelines. The Wrestler [inspirations] drifted away as we hurdled into a black hole."

Mortimer wanted Archenemy to feel more like the most out-there superhero stories as well as a grounded movie about heartbreak and spiritual crisis. Comic book titans like Grant Morrison, Bill Sienkiewicz, and (now-disgraced) Warren Ellis were guideposts for the movie's tone, as was movie legend Wong Kar-wai. Mortimer cites Wong's "obsession with romantic failure" as particularly key.

"Grant Morrison is a huge influence on me," he says. The tone of Morrison's work was so important, he felt it necessary to give copies of Morrison's acclaimed Superman comic All-Star Superman to the set of Archenemy. "I gave everybody copies," he says. "Looking at Max Fist, his memories and his desires in that gleaming utopia, [felt like] Warren Ellis' Planetary and Grant Morrison's All-Star Superman. But the reality of it is completely different."

Though comic books continue to play a significant influence on their live-action adaptations, Mortimer feels the movies still pale in ambition to the comics.

"Superhero myths in movies are inadequate to me," he says. "They operate on a scale and a mythological worldview, and I want to operate on a human, emotional point-of-view but still be cosmic and wild. In a lot of ways Archenemy was an aesthetic project."

The one way Archenemy achieves its aesthetics are in its arresting animated sequences. Inked in shades of science-fiction pinks and blues, the sequences add ambiguity to Max Fist's story. (At least until the end, when the movie finally answers the question, "Is Max Fist for real?")

"I wanted to visualize his story when he talks about his superhero cosmic world," explains Mortimer. "That stuff had to feel like it was a memory or fantasy, and you don't know what it is. It had to be expressionistic."

While the sequences alleviated budgetary restrictions (Mortimer recalls asking his team, "Can we really shoot this stuff like it was the goddamn Matrix?"), the director was intrigued by the thematic possibilities.

"If we show that realistically, how does that affect the way we understand what he's saying? When the man is telling his stories, how does it make him feel? That's the way we talked about animation."

And so, once again, Mortimer turned to the comics. "I was interested in making it feel like a dream. How do we make it look like Bill Sienkiewicz drawing Elektra's childhood in Elektra: Assassin?" he says. "Or Pink Floyd's The Wall where the animation is emotional content, not story content?" As for the contrast of pink and blue, Mortimer says there was plenty of utility in that juxtaposition.

"Together they were a contrast. But individually, they were inviting," he says. "They absorb you into this cosmic place."

A color thread runs in Archenemy via its characters. Max Fist and Hamster appear wearing, or are photographed in, pink, while Indigo and Cleo are in blues. "Tracing the way colors tell us about who people are," Mortimer explains, "You wind up on pink and blue because there is something so contemporary and modern and confusing about gender, confusing about what these colors are supposed to make you feel. It feels cosmic and human in an interesting way."

One of the final markers of Archenemy's transgressive nature is, when late in the movie, Max Fist — in a costume that bears an uncanny resemblance to the Punisher — is seen in gleeful, slow-motion euphoria over his violence.

“Get a little high when you watch Archenemy.”

"That is Max at his happiest. That's a moment of transcendence," Mortimer says. "We've seen him commit violence, he's beaten people to death. But in that battle he's like, This is me. On Earth I've been dying, but I'm finally expressing myself. To him, that is the greatest moment, but we know watching from the outside, that's rough. If that's the highest you can transcend, that's dark."

Still, Archenemy isn't totally a nihilistic picture. He parts with a bit of advice on how to watch Archenemy to feel the full impact of its might: "Get a little high when you watch Archenemy and get to that scene. It'll take you places."

Archenemy will be released in theaters and Digital and VOD on December 11.

More like this
Entertainment
8.4.2022 10:30 AM
Batgirl’s cancellation is bad for all superhero movies — here’s why
By Dais Johnston
Entertainment
8.6.2022 3:00 PM
'Nope' editor Nick Monsour reveals the secrets behind Jordan Peele’s sci-fi monster
By Jeff Spry
Culture
8.15.2022 10:30 AM
Will the Corinthian return in Sandman Season 2? Comics reveal the answer
By Mónica Marie Zorrilla
Related Tags
Share: